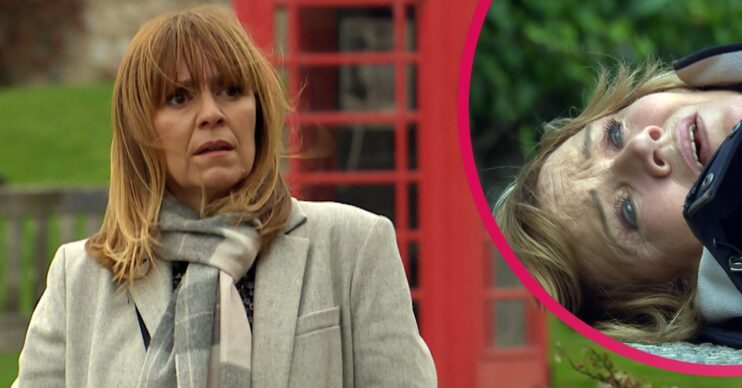 Emmerdale SPOILERS: Rhona to go to prison after she assaults Brenda?

Will Brenda call the police?

Emmerdale spoilers for next week reveal Rhona ends up accidentally pushing Brenda over during a scrap, but could she face going to prison?

In next week’s scenes Cathy tries to comfort a distraught April as she gets bombarded with more bullying messages.

April tells her to stay away before she becomes a target too and hurries off in tears.

Seeing how much this is affecting April, Cathy is left utterly guilt-stricken.

The next day, Cathy and Heath feel terrible knowing April has skipped school. Cathy realises she needs to come clean to April.

April is shocked when Cathy confesses she started the online trolling.

April is incredulous at Cathy’s confession and heads off, furious, leaving Cathy terrified of the consequences to come.

Emmerdale spoilers: Rhona and Brenda get into an altercation

The next day April comes clean to Rhona and admits she’s being bullied again and knows who it is.

Panicking Bob starts to search for Cathy but Rhona finds her and insists she’s telling Brenda, Bob and the school about her bullying.

Frightened, Cathy makes a run for it.

On Main Street, a confrontation develops as Cathy tries to run from Rhona.

Seeing what’s going on, Brenda steps in as Rhona grabs Cathy to stop her from running away again.

Soon Rhona elbows Brenda off and catches her in the face, however things just get worse.

When Brenda goes to grab Rhona again, she shoves her and Brenda falls roughly to the floor.

Everyone is left shocked after the incident. Will Brenda go to the police and press charges against Rhona?

The next day Bob is emotional at having to finally face his failings as a father. He tries to talk to Marlon, but tensions soon run high and their family rift seems unrepairable.

In a recent interview, Zoe Henry spoke about Rhona and Brenda’s altercation.

When asked if Rhona meant to be aggressive with Brenda, Zoe said: “No she doesn’t mean to do that at all.

Read more: Emmerdale: 4 clues Marlon missed that April is being bullied – as he’s slammed by viewers

“It’s the heat of the moment and in Rhona’s defence, if there is such a thing, Brenda doesn’t take it particularly well and does that typical mum thing which any parent will know, ‘my child wouldn’t do that.’

“And I think that just absolutely ignites Rhona’s anger even more and she thinks ‘how can you not see it?’

“So she’s not very well behaved, Rhona, in that scene.”