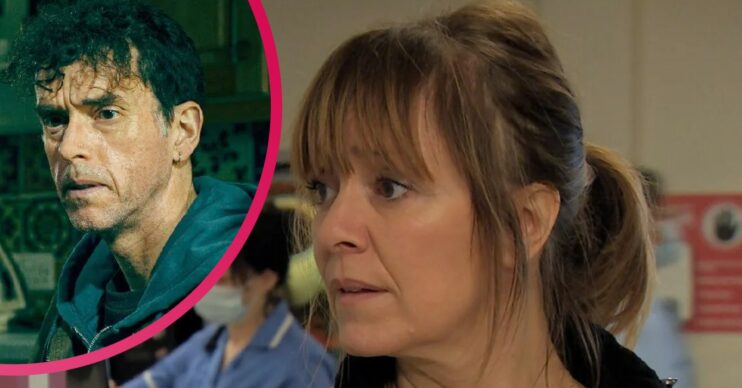 Emmerdale spoilers: Rhona at breaking point as she lashes out at Marlon

Is it all too much for Rhona?

Poor Rhona is struggling to hold it together in the aftermath of Marlon’s stroke, Emmerdale spoilers reveal.

While the Dingle clan do their best to stay positive for Marlon, Rhona can’t find a silver lining at all.

The family plan to make a video for Marlon to watch in hospital but both Rhona and Paddy buckle under the pressure.

How is Rhona coping after Marlon’s stroke?

Meanwhile, in the hospital, Marlon meets his speech therapist for the first time.

But things don’t go so well when he becomes increasingly frustrated as he struggles to say simple words.

Marlon is visibly upset by his slow progress and Rhona finds it extremely hard to watch.

She stubbornly pushes him a little bit too hard, forcing the nurse to step in.

The shocked nurse takes Rhona aside and gently tells her that she needs to go easier on Marlon.

She says Rhona is putting too much pressure on him and she needs to reel it in.

He promises that he’ll try to do better by Marlon too but Rhona remains unconvinced.

Has Marlon isolated himself in Emmerdale?

Back at the hospital Rhona says a heartfelt apology to Marlon, which he accepts.

He can’t bring himself to watch the family video though, it’s too much of a reminder of everything he’s lost.

Soon Mary becomes concerned that Rhona’s putting too much pressure on herself.

And, surrounded by silence, Marlon soon regrets his request for no visitors.

Engulfed by a long and lonely silence, what will he do?

Rhona’s not the only one struggling with Marlon’s predicament though.

Paddy finds himself unable to take part in the Dingles’ video as he feels he’s being ‘fake’. But he buckles under the pressure and ends up recording an inadequate message for his bestie.

Marlon suffered a stroke due to a blood clot on his brain.

While surgeons were able to remove it, they explained to Rhona, April and Mary that the road to recovery could be a long and frustrating one.

Marlon has already been seen struggling with the new limitations he’s faced with.

And while the Dingle clan are all trying to put brave faces on, Marlon’s situation is looking dire.

Will Rhona be able to stand by her man through this?