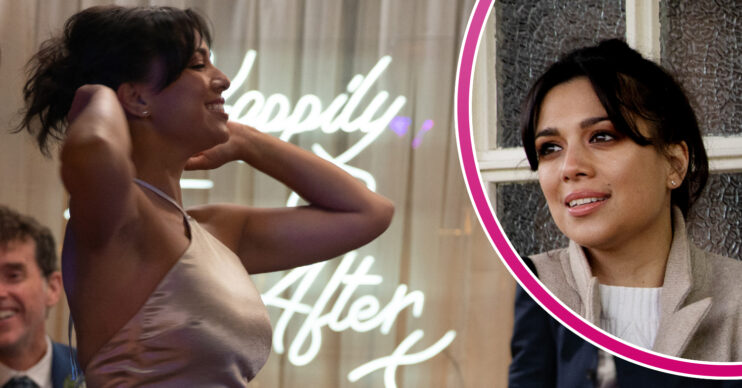 Emmerdale spoilers: Priya faces her fears as she keeps promise to Marlon

Priya's got her smile back

Emmerdale spoilers for next week reveal that Priya finally gains the confidence to show off her burns.

After making a promise to Marlon that she won’t cover up her burns at his wedding, Priya takes the huge step of wearing a dress that shows off her back.

Will Priya finally feel comfortable in her own skin or will the happy moment be short-lived over in Emmerdale?

Priya hasn’t been herself ever since she suffered third-degree burns from a maze fire caused by serial killer, Meena Jutla.

After struggling to cope with her physical appearance as a result of her burns, and undergoing skin grafts, Priya has struggled with her self-confidence.

It took Priya a long time to look at herself in the mirror, immediately covering up her scars and resorting to wearing baggy clothing from that point on.

Previously, those around her have tried to support her in gaining the strength to uncover her scars but their attempts failed.

The thought of showing her scars and becoming vulnerable was something she couldn’t deal with emotionally, also sparking the return of her eating disorder.

In scenes earlier this year, viewers saw Priya take it out on a journalist who was photographing the wedding planner.

When asked to remove her jacket, the journalist was asked to leave, causing Priya much distress at the thought of having her scars photographed.

What helped change Priya’s mind about uncovering her burn scars?

Priya recently opened up to Marlon about her struggles after becoming upset over a photo of herself pre-injury.

She wanted to be the smiling and happy woman she used to be.

Marlon understood her pain and explained that he felt similar seeing photos of himself before his stroke.

Letting an emotional Priya in on his secret, Marlon let her know his wishes to learn how to walk again for the wedding.

He wanted Priya at the wedding but there would be “one rule… no jacket.”

After her promise to Marlon, Priya takes off her jacket at the wedding, next week, to reveal her scars in a stunning, backless dress.

Dancing at the wedding reception, Priya’s confidence returns, with her family and friends watching on as she smiles once more.

Has Priya learned to embrace her scars?

Will she keep them uncovered from now on?

Read more: Who is Charity Dingle and how many children does she have?

Emmerdale usually airs on weeknights at 7.30pm on ITV, with an hour episode on Thursdays.