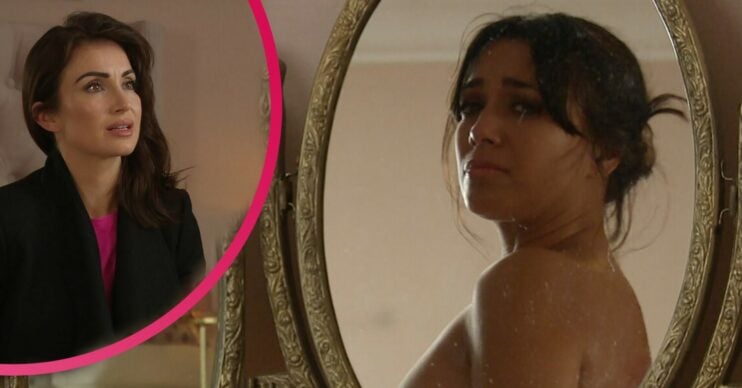 She finally faces her fears

Emmerdale spoilers for next week reveal the heartbreaking moment when Priya looks at her scars for the first time.

It’s a massive moment for the devastated woman as she tries to take in the injuries she suffered during the maize maze blaze.

With best friend Leyla there to support her, Priya decides that the time has come to face the truth.

But will this massive moment help Priya begin to heal or make things much worse?

In the weeks since the horrendous accident, Priya hasn’t felt able to look at her scars.

But when Leyla comes over to help her choose an outfit for Rishi’s Christmas party, she decides it’s the right time.

She knows that once she’s seen what her body looks like, she’ll be able to move on in some way.

However, nothing can prepare her for the moment when she finally looks and sees just how badly she’s been injured.

Read more: Is Kerry leaving Emmerdale already as she plots her exit?

Even Leyla is stunned into silence when Priya takes off her bandages, and they take in the true extent of the scarring.

But she promises Priya that now it’s done, they can help her begin to get her life back.

As the guests gather for the party, Priya tries her best to conceal her true feelings.

Inside she’s consumed by physical pain and emotional torment about her scars.

Read more: Emmerdale explains Victoria and David’s absence, but when WILL they be back?

When the subject of food comes up, there’s a look of anguish across Priya’s face.

She’s battled with anorexia before, and her old anxieties begin to surface as she contemplates what lies ahead.

Can Priya manage her emotions or will her eating disorder return?