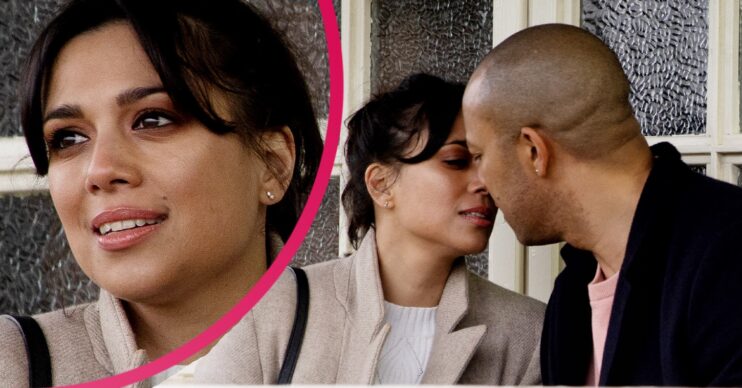 Emmerdale Al charms his former fiancée and is rewarded with a kiss!

Troubled Priya and her ex Al find themselves sharing a charged moment in Emmerdale next week.

But considering Al broke Priya’s heart once before, is the return of her former fiancé into to her life really what Priya needs at the moment?

The young mum has been struggling returning to everyday life, after a fire started by Meena left Priya with terrible burns to her back.

While she has bravely got back to work and tried to forge ahead with her life, it hasn’t been easy.

Her physical scars are still painful and uncomfortable. Meanwhile the ordeal she went though has deeply knocked her confidence.

Read more: Emmerdale cast in full for 2022 – meet them all here!

It’s when Belle and Al are excitedly putting together their plans for their wellness business together that Al notices Priya is upset.

Getting her alone, Al gently asks how she is, and Priya opens up. She admits the scars have destroyed her body confidence, and Al lends her a sympathetic ear.

Then… the pair share a moment. The exes lean in for a kiss, something that shocks both of them.

Priya was once deliriously happy with Al, overcoming her brother Jai’s objections to the relationship and even getting engaged.

However, she was left heartbroken when she later discovered that Al was also in a relationship with Debbie Dingle. The two women teamed up to get their revenge on Al, but that didn’t mend Priya’s broken heart.

She went on to find love with Al’s son, Ellis. However, they never managed to make a go of it, and her injuries from the fire left Priya a virtual recluse for a time.

Now she’s trying to pull her life back together, but will rekindling things with Al only mess with her head even more?

Read more: Who dies in Emmerdale this year?

After their charged moment, both agree it was a mistake. They decide to forget it ever happened – especially as Al is now shacked up with Kerry.

But can Emmerdale’s Priya and Al really leave it all in the past? After all, secrets don’t tend to stay secret for too long in Emmerdale…

Do you think Priya should reunite with Al? Leave us a comment on our Facebook page @EntertainmentDailyFix and let us know what you think!