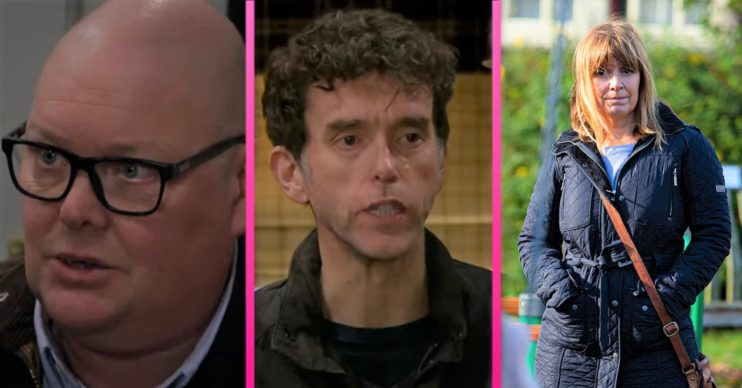 Rhona and Marlon have been getting closer again

Emmerdale spoilers reveal Marlon and Rhona have feelings for each other. But will Paddy help bring them together?

Rhona offers Charles the chance to rent a spare room in her house. However Marlon worries there won’t be anywhere for him to stay the next time he sleeps over.

He’s taken aback when Rhona suggests he can in her room.

When Marlon updates Paddy on he burgeoning relationship between Rhona and himself, Paddy is sceptical.

He quickly starts to make Marlon question the assumptions he’s made.

Later Rhona goes to Paddy and confides in him that she may have feelings for Marlon.

Paddy is forced to bite his tongue about what he knows regarding Marlon’s feelings for her and Rhona insists he stay quiet about their discussion.

Read more: Emmerdale SPOILERS: Trouble for Sarah as Danny is released from prison?

At The Woolpack, Marlon and Rhona continue to misread one another’s feelings until Paddy arrives.

Will he reveal that their feelings for each other are mutual?

It was also revealed earlier this month that Marlon and Rhona would be spending New Year’s together.

The two previously had a relationship back in 2010. However Rhona started to develop feelings for Marlon’s best friend Paddy.

She began dating with Paddy, but she soon found out she was pregnant with Marlon’s child.

Over the years Rhona and Marlon remained friends. But eventually Paddy and Rhona split up.

Earlier this year, Marlon was furious when Rhona revealed she was going to move to France with her boyfriend Graham and they were taking Leo.

However on the night they were meant to leave, Graham was killed by Rhona’s rapist ex-husband Pierce Harris.

Marlon was arrested for Graham’s murder. But eventually the truth came out about Pierce killing Graham and the chef was released from prison.

Over the last few months, Rhona and Marlon seem to have been growing closer again. Will they get back together?

Are you looking forward to Emmerdale’s Christmas episodes next week? Leave us a comment on our Facebook page @EntertainmentDailyFix and let us know what you think of this story