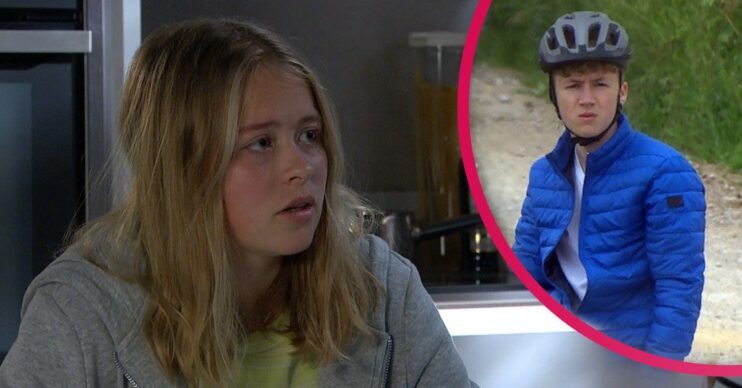 Emmerdale spoilers reveal that Noah will be accused of rape next week after an altercation with smashed Liv.

The incident takes place when troubled Liv falls off the wagon and gets blackout drunk.

Something happens between her and Noah during those lost hours, and it comes back to her in terrifying flashbacks.

But when Gabby suggests Noah could have raped her, will Liv remember more?

Emmerdale spoilers: The night before

Liv has been doing her level best to stay sober, but it’s proving to be an uphill battle.

It’s not just her cravings for booze that are tough, but Aaron and Vinny’s vigilance.

She does the right thing and seeks out Laurel for advice, hoping her fellow alcoholic has some words of wisdom.

But despite Laurel’s best efforts, when some passing mates offer Liv a drink, she takes it – and things spiral.

Waking up to reality

The next day, Liv is horrified to wake up covered in bruises and has no recollection of what happened to her.

Heartbroken Aaron explains that he found her in the doorway in a terrible state but knows no more.

That’s when Liv starts to experience frightening flashbacks where she’s fighting with a mystery person.

As the visions become clearer, Liv realises that person is Noah.

Read more: Who is Noah Dingle in Emmerdale and who was his dad?

When Liv shares what she’s going through with pal Gabby, the pregnant Thomas is shaken.

She’s been at the receiving end of some seriously creepy behaviour from Noah and worries this could be a sexual assault.

Gabby shocks Liv to the core when she mentions the word ‘rape’ and warns her that Noah could be capable of a terrible crime.

But as she says it, Aaron walks in and overhears – and storms out to collar Charity’s son.

Noah might protest his innocence, but Aaron’s in no mood to hear it and tells Liv to call the police.

But given that she can’t be sure he raped her, Liv feels conflicted about ruining Noah’s life without evidence.

Battle lines are drawn between the Dingles as Charity desperately searches for proof Noah is innocent.

What really happened that night, and did Noah attack Liv?