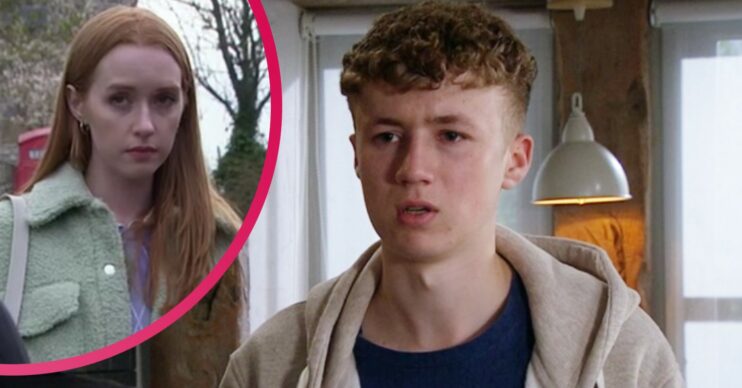 Noah will be facing a long time in prison

The twisted teenager has been arrested for stalking his ex Chloe Harris.

Viewers watched as Noah secretly recorded her, took pictures of her sleeping and even bugged her bedroom in a sordid effort to get to know her.

In last night’s episode, Noah was arrested after his mum Charity realised he could become very dangerous if it wasn’t nipped in the bud.

He was carted off by police and questioned.

Next week, he will be released pending further investigations and will return to the village.

Arriving back he rages to his mum that Chloe will pay for reporting him to the police.

However, Charity finally puts him straight and tells him that she’s the one who reported him.

Charity’s devastated when Noah runs away – fearing she’s destroyed their relationship for good.

In an effort to get out of trouble, Noah visits Chloe and attempts to apologise.

But it’s all for nothing when he pressures her into telling the police it was all a big misunderstanding.

Shaken that Noah doesn’t realise the extent of what he’s done – she tells him to leave her alone for good.

Later, Charity is desperate to get through to her son.

She tells him his anger at being reported it stopping him from seeing how dangerous his behaviour is.

And just as she thinks she’s getting through to Noah, she tells him if he faces up to what he’s done he won’t go to prison.

However, at that moment Harriet arrives and arrests Noah for harassing Chloe.

He is charged with both harassment and breaking and entering – with his case referred to a higher court.