Jacob is back in the Dales

Emmerdale spoilers for next week reveal Jamie is shocked when Kim’s lifeless body is found.

Meanwhile Tracy worries about leaving Frankie as she returns to work and Meena sees Jacob as an obstacle to her and David’s happiness. 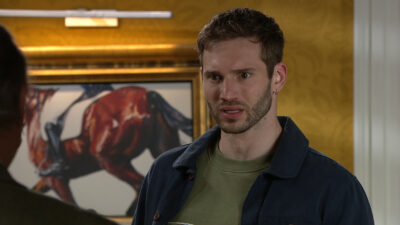 Noah tells Jamie that he found Diazepam in Will’s toolbox. Jamie thinks Will is the obvious suspect in Kim’s poisoning.

Later with Dawn upstairs, Jamie snoops around Woodbine and eventually finds the toolbox with Diazepam in.

Jamie takes photos but is caught red-handed when Will returns home.

Will is furious but Jamie pretends he was just looking for a screwdriver. 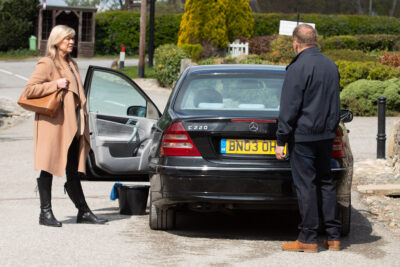 Jamie shows Kim the photographic evidence and she’s heartbroken to think he’s been poisoning her.

Later Kim asks Will why he has Diazepam and he’s wary and refuses to answer the question.

Kim presses the point and he tells her it’s for his nerves, but Kim isn’t buying it.

The next day Kim tells Jamie her plan to catch Will on camera. 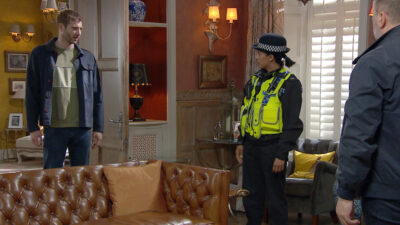 Will is called to Home farm on his day off and it appears he’s walking into her trap.

Later Jamie receives a call from Home Farm and rushes off, worried.

As he gets to Home Farm he’s horrified to find Will being arrested and Kim’s lifeless body on the floor.

A body bag is soon being unzipped ready for her body…

3. Tracy worries about leaving Frankie as she returns to work 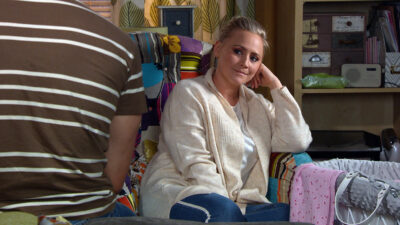 Tracy tries to stay calm when Nate reals the farm may have to be closed down if an infection has spread.

Worried about money, he asks Tracy to return to work and she agrees, but is hiding her panic about leaving Frankie.

Nate books for Lydia to have Frankie the next day when Tracy goes back to work.

However the next day Tracy’s anxiety heightens when Nate breaks the news that Lydia is ill and Faith will be looking after Frankie. 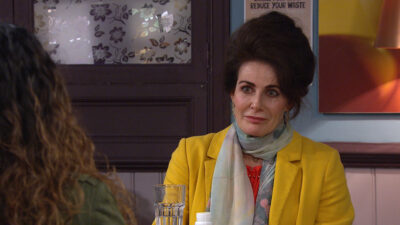 Emotional, Tracy opens up to Pollard about her feelings leaving Frankie.

Pollard is sympathetic and lets her finish early.

Tracy dashes to get home, but at Tug Ghyll Faith feels a stab of pain and drops Frankie’s dummy.

Tracy arrives just in time to witness this and struggles to contain her anger when she realises Faith was going to return the dirty dummy to Frankie. 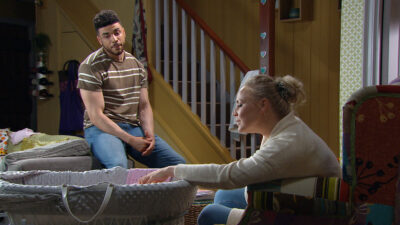 Nate is worried when she resolves to not go back to work, telling him Frankie is only safe with her.

However Tracy is uncomfortable at Wendy touching her baby with unwashed hands. 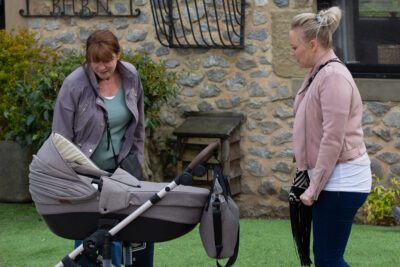 She rushes away. Back home Tracy tries to wipe the germs off Frankie’s face.

She’s stricken when she accidentally scratches her daughter. Later a helpless Tracy breaks down. Diane confides in Gabby about Liam and the voicemails, leaving Gabby concerned about Bernice.

Later Gabby gets drawn into Jacob and Leanna’s argument and she can’t help embellishing the facts about Liam and Bernice to attack Leanna.

David is left reeling by Meena’s sense of urgency after she suggests moving in.

He tells her she will have to she’ll have to wait a few weeks as he’s worried about Jacob and wants some time alone with him.

5. Jacob accuses Billy of being a paedophile 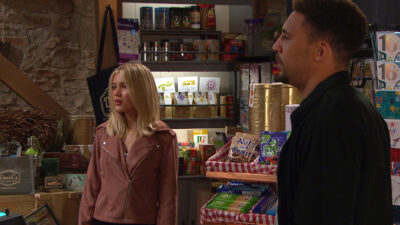 Meena grits her teeth and tries to hide her displeasure.

Billy is angry when Jacob confronts him about Leanna. Leanna told Jacob about her crush on Billy.

Jacob makes Billy out to be a paedophile. 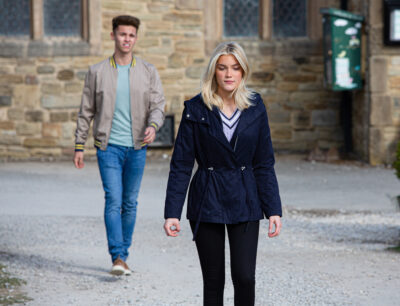 Soon Leanna walks in on the confrontation and is horrified.

She asks Jacob to give their relationship another chance, but he shoots her down harshly.

She leaves upset, but as Jacob drops his façade it’s clear he still loves her too.

Meanwhile Meena is starting to see Jacob as an obstacle to her and David’s happiness.