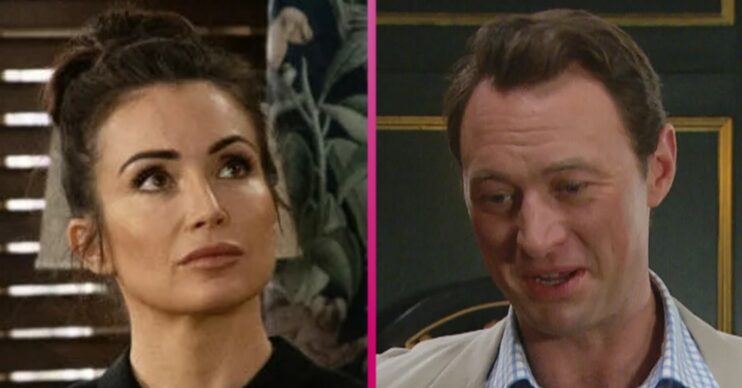 Is Leyla about to lose everything thanks to her addiction?

But he thinks it’s all to do with babies.

When Leyla lashes out at him again, is there more heartache ahead for this Dales couple?

Read more: How did Emmerdale dog Batley die? The tragic scene was award-winning

Leyla has been binging on cocaine day and night.

Earlier this week she couldn’t even make it through a family meal without sneaking off to the toilets to sniff a line.

Only former partner-in-coke Suzy has noticed what she’s up to. Former drug addict Jai has failed to connect the dots and doctor husband Liam hasn’t spotted the red warning light of addiction flashing above his wife’s head.

But Liam has finally noticed something isn’t right.

He can see she’s moody and cagey, but will his conclusion about what’s actually wrong be the right one?

Baby heartache for Leyla and Liam?

Next week in Emmerdale spoilers, Leyla is fed-up of Liam’s constant nagging.

He is banging on about babies.

But Leyla completely dismisses any notion he has of having kids together. Will Liam be okay with that? Or does he feel the longing for another child that Leyla’s refusing to give him?

Liam tries to persuade her to start getting healthy, clearly with the idea of baby making in mind.

Leyla insists she’s not interested – keeping the secret that she’s actually recovering from her cocaine binge the night before.

Wanting to at least try not to have another hit, Leyla keeps herself busy to avoid taking more cocaine. But she fails and does another line.

Will Liam work out what’s going on at last?

And where does this leave his baby plans?

Is Leyla going to break his heart again?

Why is Leyla taking cocaine in Emmerdale?

Leyla has had a tough year.

She supported Liam through his grief after his daughter Leanna was murdered by Meena Jutla.

Leyla then suffered a miscarriage, which broke her heart. It was after that the couple agreed not to have any kids together. But is that what either of them really want?

Meanwhile, Leyla was then shot by Meena herself and almost lost her life.

As she struggled to deal with everything she turned to cocaine to blot it all out.

However, is she ruining her chances of ever having a happy family life?

Can anyone help her quit before she loses her chance to have a baby with the man she loves? And loses that man too?