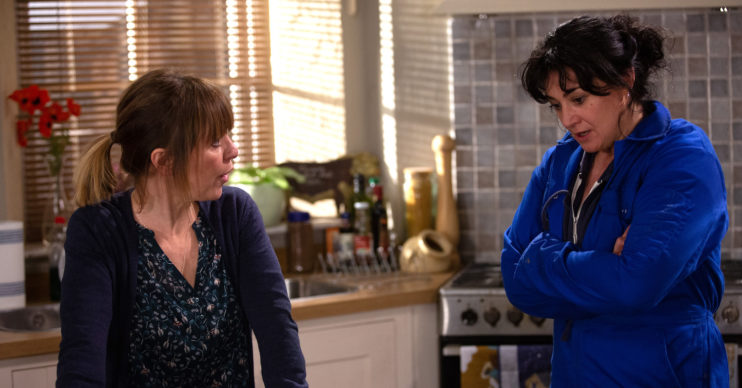 The two agreed to go into business

In next week’s Emmerdale, Moira and Rhona end up clashing during a client meeting. Are their plans to work together ruined before it even began?

A couple of weeks ago, Rhona discovered Graham had left her money and she decided to invest it into Butler’s farm, which is owned by Moira.

In upcoming episodes, Rhona and Moira go to a client meeting with restaurant boss, Ricky, but the two women are soon left disagreeing.

Moira says his proposed meat order is impossible to fulfil, leaving Rhona hurt and angry at not being listened to.

Later, Nate calls Rhona to the farm under false pretences as he has a proposition. He suggests to her that they secretly split half the restaurant deal with Butlers and the vet reluctantly agrees to it behind Moira’s back.

But she makes it clear to Nate that she wants to be the one to tell her business partner.

Nate and Rhona shake hands on their deal. But how will Moira feel about it all?

Later Rhona tells Moira she’s managed to make an agreement with Ricky and Moira is happy at the news. Seeing her so happy, Rhona neglects to mention that Nate is now a part of their deal.

She secretly buries her ease at going behind her business partner’s back.

How will Moira feel when she finds out the truth?

The two women agreed to go into business a few weeks ago after Rhona came into some money.

Knowing Moira had money troubles, she decided a great way to honour her late boyfriend’s memory was to invest it into a business.

But will friends working together prove to be more difficult than they expected?