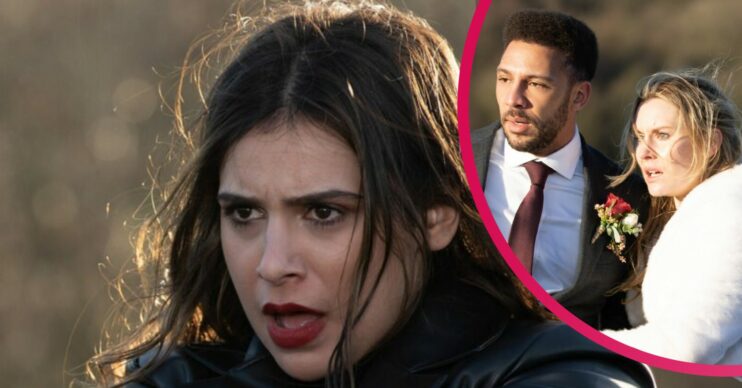 She's back and she's got murder in mind

Emmerdale spoilers for next week reveal Meena Jutla is back at last – and she means business.

She’s not messing around as she arms herself with a gun and kidnaps Billy and Dawn on their wedding day.

But who will become her next victim? And will they be her last?

Why does Meena return to Emmerdale?

Billy and Dawn are getting married and Meena is not happy about it.

Determined to wreak havoc and ruin their happy ever after, Meena has been messing with the bride for weeks.

After destroying her dress and following her round, Meena finally makes her move.

She lets Billy and Dawn get married and the couple are thrilled to be husband and wife at last.

As Billy promises he never wants to be without his new wife, it looks like he’s not going to have a choice in the matter…

Everyone is at Home Farm waiting for the reception to begin, but the newlyweds are nowhere to be seen.

What has Meena done to Billy and Dawn?

As the guests begin to wonder where Billy and Dawn are, Will becomes increasingly concerned.

It soon becomes clear Meena is behind it all…

Meena has kidnapped the bride and groom and taken them to a remote viaduct.

She has a gun and she makes it known she’s going to use it.

Taunting Billy and Dawn with the weapon, Meena tells them they’re going to play a game.

Who does Meena kill next?

Meena reveals she will kill them both unless Billy chooses which one of them will die.

As Billy insists he’ll take a bullet for Dawn, Meena pulls the trigger.

But who has been shot?

Is Dawn going to be left a widow on her wedding day? Or could Billy be left mourning his new wife?

And will Meena take more victims before she’s finally caught?

Is the end here at last for the Dales murderer? Or will she keep killing for weeks to come?

Who will be responsible for Meena’s downfall?