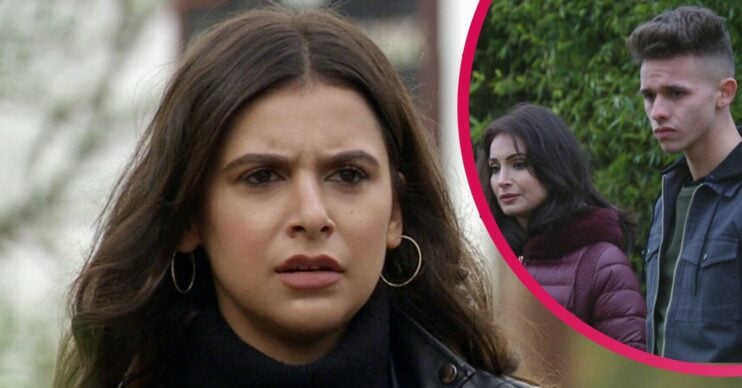 Leyla, Jacob and Sam could all discover the trinket box

Emmerdale spoilers for next week reveal Meena‘s bit’s box is inches away from being discovered.

But as Leyla Cavanagh, Jacob Gallagher and Sam Dingle all come within spitting distance, will they actually find it?

Killer Meena keeps a ‘trophy’ from every life she takes.

Viewers know the murderer stores them in a first aid kit box which she has kept hidden in her room at the B&B.

But after Noah found Leanna’s ring on the floor of the B&B and stole it, Meena decided she needed to cover her tracks better.

She got the ring back after breaking into the Dingles’ and stealing it from Samson‘s bag, after Noah dumped it on him.

Where did Meena bury her box?

Once Meena had retrieved the ring, she said goodbye to her box and buried it at the allotment under a part of soil that Jacob told her Liam would never dig up.

However, next week there has been some damage to allotment and it leaves her box visible.

Leyla and Jacob are first on the scene as they survey the chaos.

But neither of them notice the box sticking up from the ground and wonder what it could be.

Later, Sam Dingle is working there and digging up the earth.

Will Meena’s box be found?

As he shovels dirt around, he ends up reburying the trinket box. But will he see it before it’s too late?

The box has evidence that Meena is a killer, but how much can be proven without it?

Will Meena get away with murder again if her box remains undiscovered?