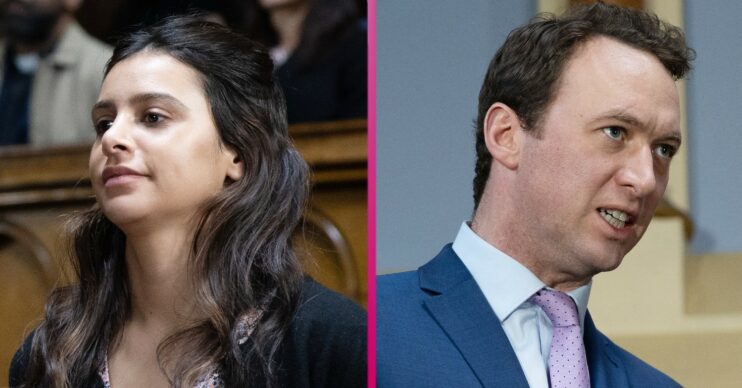 Emmerdale SPOILERS: Meena to be found not guilty as Liam lashes out in court?

Emmerdale serial killer Meena was in court in tonight’s episode (Monday, April 11 2022) and Liam ended up lashing out at her.

Will this lead the jury to believing she’s not guilty?

Emmerdale: Meena to be found not guilty as Liam lashes out in court?

She was charged with the three murders but has pleaded not guilty and is now on trial.

In tonight’s scenes Meena’s trial began and Leanna’s father, Liam Cavanagh, was in court to testify.

He told the court how Meena admitted to murdering his daughter and bragging about it.

However the defence accused Liam of having an affair with Meena and blaming her for Leanna’s death when she broke things off.

Meena pretended to be scared of Liam and he lost his temper at her in court.

But what’s next for Meena as her trial continues this week?

Emmerdale spoilers: What’s next for Meena?

Emmerdale spoilers for this week reveal Manpreet dreads court but is determined to destroy her sister and bring her down.

Meanwhile in prison, prison officer Ian is conflicted when he goes against his better judgement and finds himself flirting with Meena.

Once in court, Manpreet refuses to let Meena’s performance rattle her and takes the stand to testify against her sister.

The defence dives deep into Manpreet’s past and tries to paint her as a liar. Manpreet is furious to see Meena relishing in the spectacle.

Later Meena’s high spirits are dampened when she’s advised against taking the stand.

However she rejects the advice, determined to take the spotlight, and prepares for the next day.

Meena rehearses her lines in her cell and soon takes the stand in court, playing the victim.

She delivers the performance of a lifetime ton an enthralled jury, but what will they think?

Later, everyone awaits the verdict and the court is consumed in agonising tension.

Will they find her guilty or not guilty?

The next day the shocking events of the trial hit the morning news.