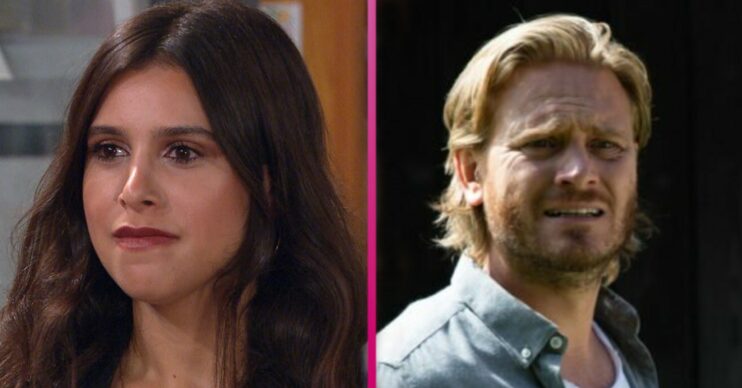 She couldn't be that evil, could she?

Emmerdale spoilers for next week reveal that evil Meena could be set to kill again – and baby Theo’s her victim!

The psycho nurse looks set to take the ultimate revenge on boyfriend David by doing away with his infant son.

Meena’s rage is sparked by the closeness between David and pal Victoria, who is trusted to babysit the little boy.

Hellbent on punishing them both, Meena sneaks into Vic’s house while she’s looking after Theo.

But is Meena evil enough to harm an innocent child?

Emmerdale spoilers: Victoria’s in the way

They’ve been dangerously close for a while now, so David and Victoria are on jealous Meena’s radar.

As two single parents, they’ve come to depend on each other for help with the kids.

However, when Chas and Paddy’s daughter Eve gets the last nursery place, they are both in bother.

So, David and Vic decide to join forces on a childcare rota that works for them both.

She rocks up for a steamy afternoon with her man, only to find him playing Daddy Daycare with two kids.

Meena complains but realises that she’s not playing the situation well and resolves to be smarter.

But the next day, when she rings to offer David her babysitting services, he kills the call.

Later, when Theo is at Vic’s for the afternoon, Meena slips into the house.

Victoria is upstairs checking on her son Harry when the double murderess sneaks inside.

But when she returns downstairs, there’s no Theo and no trace of Meena either.

Vic’s horrified to see both the baby gate and back door wide open.

Rushing outside, she begins screaming for help and soon a search team of worried villagers joins her.

David is distraught as they search far and wide for his precious son.

Is Meena about to claim another victim and destroy David’s life forever?

Have you been watching April’s storyline in Emmerdale? Leave us a comment on our Facebook page @EntertainmentDailyFix and let us know what you think!