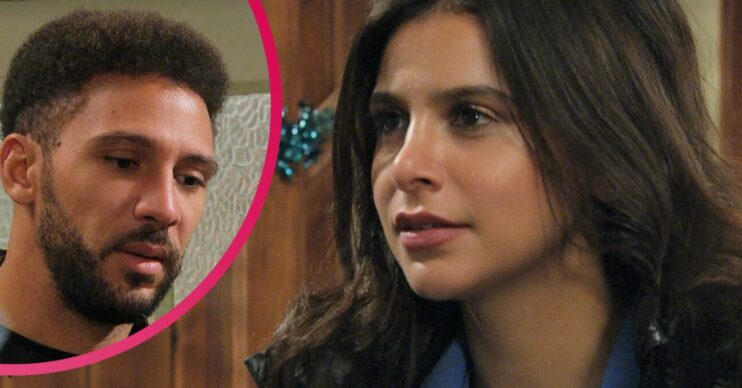 Emmerdale spoilers for Christmas reveal Meena Jutla drop the bombshell she’s pregnant with Billy Fletcher‘s baby. But is she telling the truth? Something tells us not everything is as it seems… Read more: Emmerdale airs huge showdown between Manpreet and Meena Billy reunites with Dawn Meena is pretty stunned when her meddling backfires and actually […]

But is she telling the truth? Something tells us not everything is as it seems…

Meena is pretty stunned when her meddling backfires and actually pushes Billy into the arms of Dawn.

The murderer has been trying hard to keep Billy all to herself and keep him away from his ex.

Determined to get her love rival out of the picture, Meena stirs things up when Lucas’s dad, Alex, turns up.

However, her plot to destroy Dawn’s life hits a snag when Alex does just that and Dawn turns to Billy for help.

Billy is quick to offer his support to find Lucas and the pair end up kissing. Deciding they want to be together, Billy knows he has to tell Meena the truth.

Is Meena really pregnant in Emmerdale?

Steeling himself for the difficult conversation, it’s clear Meena can’t believe her ears when Billy says he’s leaving her for Dawn.

She hastily drops a bombshell that she’s pregnant with his child.

Stunned Billy has no idea what to say to that, but is Meena telling the truth?

Manpreet certainly doesn’t seem to think so and questions her sister on whether the baby is real or not. She demands proof of the pregnancy and it’s clear she’s starting to see Meena for who she really is…

Billy, however, totally believes what Meena’s told him, but is resolute it’s Dawn he wants.

So whether it’s a plot to win him back or not, it’s not worked for Meena – yet. Especially when Dawn tells him the baby won’t affect things between them.

Is Meena looking at life as a single mum? Or could the whole thing be another great big lie?

Is Meena really pregnant in Emmerdale? And if so, will Billy change his mind about Dawn and decide to raise his family with Meena?