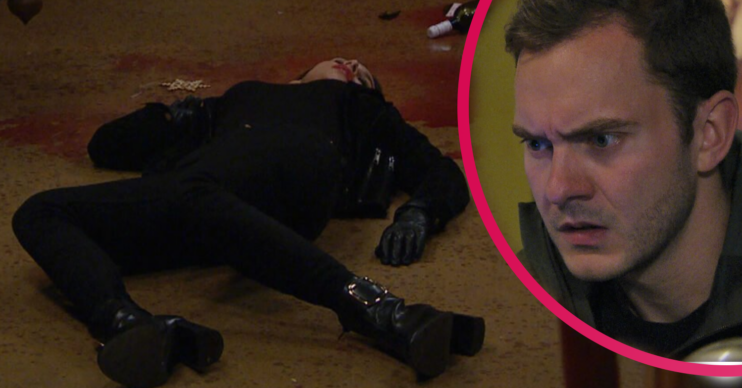 It could be the end of the killer nurse

Emmerdale spoilers for next week tease the end of murderous Meena’s reign of terror as Ben stands over her lifeless body.

Her story takes a dramatic turn when Ben finds the bodycam footage that shows Meena holding Victoria’s head under the water to drown her.

At first, he doesn’t realise Meena is the attempted murderer, but that all changes when she arrives to confront him.

During a tense stand-off, the balance of power tips, and it’s Meena who looks like she’s about to meet her maker.

They’ve barely even spoken to each other before, but Meena and Ben are soon locked in an intense discussion at HOP.

She’s there when Ben rings Billy to ask him to come and look at the disturbing video on one of the bodycams.

Meena arrives, intending to stop Ben from sharing it with anyone else, but she hears him in conversation with Liv.

Drunk Liv has broken in to steal wine and smashed a load of bottles in the process.

Meena hears Ben order her out and heads back into the office, so she finally reveals herself.

He’s shocked to see her, but Meena just smiles and lunges for the camera.

Ben is surprised but easily manages to stop Meena from wrestling the camera off him.

Instead, he rushes off with her hot on his heels and determined to catch up.

However, as he runs through the bar area, Meena slips on the broken glass and wine Liv has left on the floor.

She falls hard, and Ben turns to see her lying lifeless on the floor, and it looks like the fall might be enough to kill her.

Ben is in a panic as he considers his next move.

Should he try to help her or leave her to die?