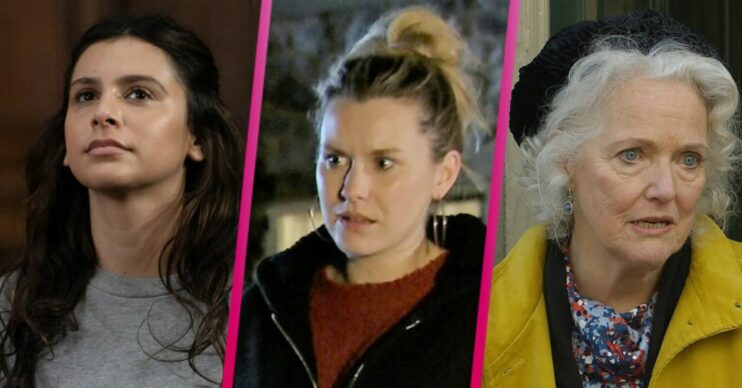 11 Emmerdale spoilers including a court twist, a drugs arrest and a shock secret

Meena has one more card to play

Plus, Dawn is blackmailed back into the world of drugs, and Noah turns nasty.

Elsewhere, Mary and Rhona have a secret…

1. The villagers prepare to face Meena

Meena is in court for her plea hearing and Manpreet and Charles, Leyla and Liam are all ready to face her.

But Manpreet knows Charles and Liam can’t discuss Meena’s confession on the stand and she’s worried.

Anticipation builds, but how will it play out?

Meena arrives in court and is disappointed to see the poor turnout.

Not quite the audience she was expecting, she nonetheless makes sure she puts on a performance for them.

She surprises everyone by pleading guilty to the first charge against her.

But there are many more charges and it soon becomes clear she has more tricks up her sleeve.

What game is she playing? And where will it end?

She’s totally distressed and gets in her car driving away.

When she abandons her phone and her car, disappearing into the night, concern grows.

Where has Manpreet gone? Is she okay?

Dawn is elated when Billy asks if he can adopt Lucas.

He’s initially fuming at the idea, but then he starts to come round and accepts the proposal.

However, it’s clear that’s not the end of it…

Dawn secretly meets Alex later that night and he demands she deal drugs for him to pay off his debts.

In return, he will consent to the adoption.

Backed into a corner, Dawn hides the blackmail from Billy. But will she give in to Alex’s demands?

Under pressure, Dawn tries to steal from Home Farm to pay off Alex’s debts.

But when Kim catches her red-handed, will she confess all?

Dawn makes one final call before accompanying Alex, but she soon realises her task is dangerous when she meets the dealer.

Just as the meeting ends, the police show up and Dawn is handcuffed and put into the back of a police car.

Is there more to this than meets the eye?

Realising he can use Amelia to make Chloe jealous, Noah flirts with her.

But Chloe just turns her attentions to Jacob instead.

Noah ups his game with Amelia and enlists Samson’s help to get Amelia alone at Cathy’s party.

However, when the truth comes out, Amelia is heartbroken by what Noah’s done.

Amelia admits to her family what happened with Noah and Kerry is fuming.

10. Rhona and Mary have a secret

They prepare a surprise party together for Marlon and experience a rare moment of tenderness as they bond over a shared secret.

What are they hiding?

11. Sparks fly for Marcus and Ethan

Marcus and Ethan go for a drink to get to know each other better.

Will this progress to something more as it’s clear they enjoy each other’s company?