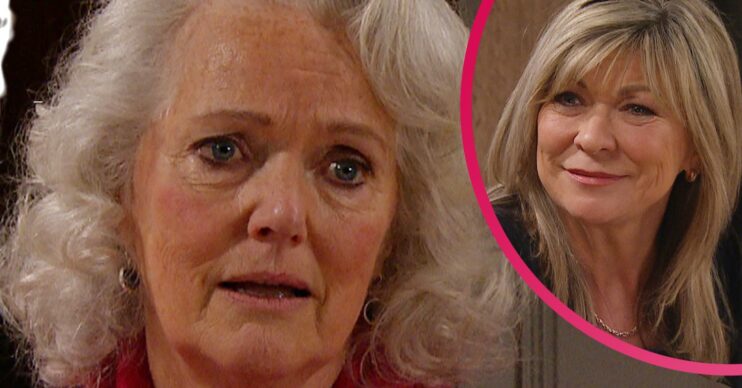 Emmerdale spoilers: Mary comes out and reveals her secret lover

Kim encourages her to open up

The upcoming episodes of the ITV soap will see Mary come out to new pal Kim as gay.

But when she then tells Rhona, how will her daughter react to the news?

Kim and Mary have recently struck up a friendship.

However, when Mary clams up as they chat, Kim realises she’s struck a nerve.

She encourages Mary to open up about a lost love.

Mary tells all to Kim – including the fact that this love was another woman.

Mary admits to Kim that she’s nervous at the thought of telling Rhona the truth about her sexuality.

Kim encourages her to be honest with her daughter.

Later, Mary tells Rhona, who is stunned – but not just by her mum’s sexuality.

Rhona is shocked to discover that Mary was in a relationship with her neighbour Louise, who recently passed away.

With Rhona still reeling from the revelations, her reaction leaves Mary worried.

Mary’s hurt, thinking that Rhona disapproves of what she’s told her.

And when Rhona later announces to the whole room that Mary is gay, Mary feels embarrassed and confused by her daughter’s actions.

Can the pair make amends?

Looking to the future

Later, Mary confides in her pal Bear as she tells him about her life and her sexuality.

When Marlon wakes up to a surprise proposal from Rhona, how will he react?

Could Rhona’s plans and Mary’s honesty end up making their family stronger than ever?