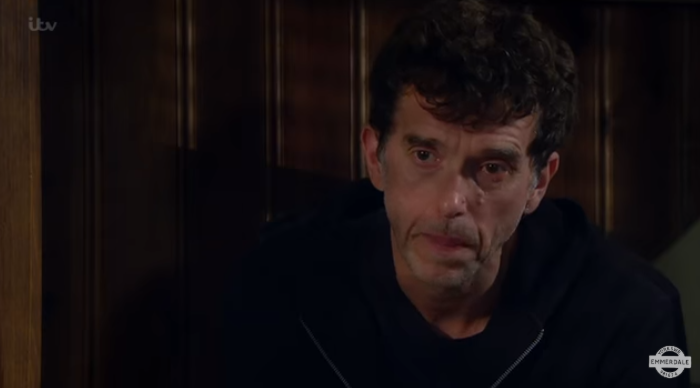 Marlon Dingle is in a bad way in next week’s Emmerdale when he’s suddenly rushed to hospital… but will best friend Paddy Kirk manage to get him there in time?

Poor Marlon has been to hell and back over the last few weeks.

Not only was he sent to jail for a crime he didn’t commit, but he also then found freedom at last, only to discover that his daughter was being bullied at school and that most of his family had betrayed him.

But as Marlon struggles to get his head around the secrets and lies that have followed since Graham Foster’s murder, his health starts to take a battering next week when the stress gets too much.

As Marlon continues to push those closest to him away, everyone is worried about the desperate dad, and so Rhona Goskirk invites him for coffee.

But as the pair chat, it is clear that Marlon’s anxiety is worse than she thought, and when two uniformed police officers knock on his door, Marlon is gripped by panic.

While Marlon talks to the police, it’s clear he is in a bad way, so once they’ve gone Paddy takes Marlon for a drive to get him out of the village.

But as they drive, Marlon complains of a dull ache in his arm, which steadily gets worse and alarm bells start to ring for a concerned Paddy.

Convinced his friend is having a heart attack, Paddy races Marlon to the nearest hospital and, as paramedics meet them at the door, he follows Marlon in as he is checked over.

But in his concern for his best friend, Paddy has totally forgotten about the fact baby Eve is still in the back of the car, and he leaves her unattended.

Paddy is horrified when he realises what he has done, but when he races back out to get Eve, he is sickened to realise she has gone. But where is she?

And with Marlon now being looked after in the hospital, will he be okay?

Where do you think Eve has gone? Leave us a comment on our Facebook page @EntertainmentDailyFix and let us know what you think!