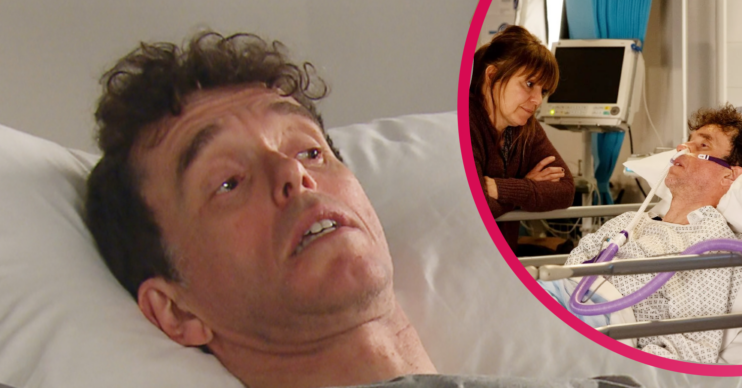 Emmerdale spoilers: Marlon given devastating news about his recovery

He suffers a health setback next week

Emmerdale spoilers for next week reveal Marlon is given more upsetting news about his recovery as he battles another health crisis.

As he’s rushed to hospital his latest illness is going to have severe consequences for his rehabilitation.

How will this setback affect the Emmerdale villager?

Marlon starts the week with a bad cough.

Bear takes him to the allotment for some fresh air, but when Liam sees him and hears how bad his chest sounds, he realises he has to act fast.

Liam decides to drive him straight to hospital.

Rhona is panic-stricken when she finds out where her fiancé is and rushes to be by his side.

Marlon is diagnosed with pneumonia and put on breathing apparatus.

When the doctor arrives, Rhona can see it’s not good news…

The medical expert tells them Marlon’s rehabilitation progress following his stroke is likely to regress due to his being so poorly.

The step backwards leaves both Marlon and Rhona heartbroken.

How will this have affected his progress? And how much more can they take?

Meanwhile, Bear blames himself for Marlon’s condition and Paddy struggles to console his father.

Will Bear forgive himself?

What happened to Marlon?

He was rushed to hospital and had an operation to remove a bleed on the brain.

But when he woke up, it was clear the effects would be long-lasting.

Rhona has vowed to be by his side every step of the way, despite her mum suggesting she should put herself first.

In shock scenes aired last week, Mary said she felt it was all too much for Rhona. She urged her daughter to consider splitting from Marlon.

Although Rhona was fuming at first and threw her mum out, she eventually opened up to Mary. She confessed she was terrified and didn’t know if she could do it.

However, she resolved to stay strong and fought hard to get him home. She enlisted the villagers to help adapt their house ready for Marlon’s return.

However, has it all been in vain?

Is this latest setback just too much?