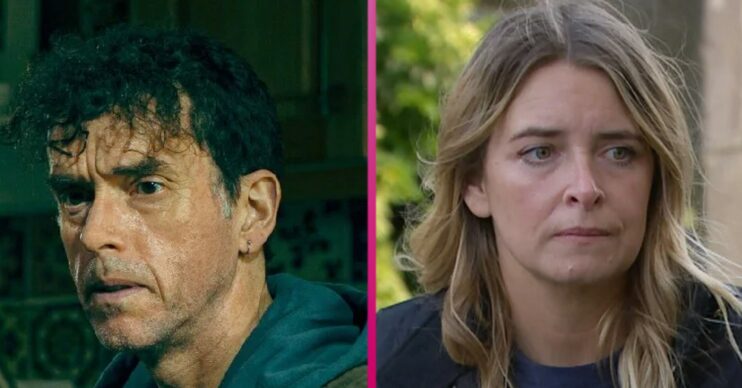 Marlon in Emmerdale is having a tough enough time as it is, but worse is to come when Charity deals him another crushing blow.

Next week’s Emmerdale spoilers reveal Marlon comes home, which is a happy occasion for the family.

However, things soon take a turn when April is left terrified of her dad suffering another stroke.

And then Charity makes things a whole lot worse…

Read more: Emmerdale cast list for 2022 – meet them all here!

As April excitedly prepares for her dad’s return with decorations, everyone is thrilled when Marlon is finally brought home.

It’s emotional and there are challenges – especially when April tries to help her dad have a glass of water.

He starts choking and terrified April thinks he’s having another stroke. She frantically shouts for Rhona and both she and Marlon are distraught.

April then makes an excuse not to be alone with her dad.

Marlon insists he’d be better off returning to hospital, but Rhona is determined he’s not going anywhere.

Can Rhona help them work it out?

Despite deciding to stay at home with his family, Marlon is then dealt another cruel blow by Charity.

She tells him he’ll have to go on statutory sick pay while he can’t work.

The news sends Marlon into further despair as he worries about the family finances.

Rhona decides she’ll have to go back to work and agrees to return part time so they’re bringing in some money.

She jumps back in at work and helps with an injured dog, but is she really up to the job?

Can she handle caring for Marlon and working in a stressful environment too?

Is Rhona going to crack?

What happened to Marlon in Emmerdale?

He had just got engaged to Rhona in a double proposal when he collapsed unable to see properly or speak.

April found him and rushed him to hospital where it was revealed he had suffered from a huge stroke.

They operated to remove a bleed from his brain.

When he woke up, it was clear he no longer had normal cognitive function and was facing a long road to recovery.

He is struggling to communicate and even things like sitting in a chair leave him tired.

Rhona has vowed to be by his side every step of the way, but the pressure really is beginning to show.

Will they make it through this?