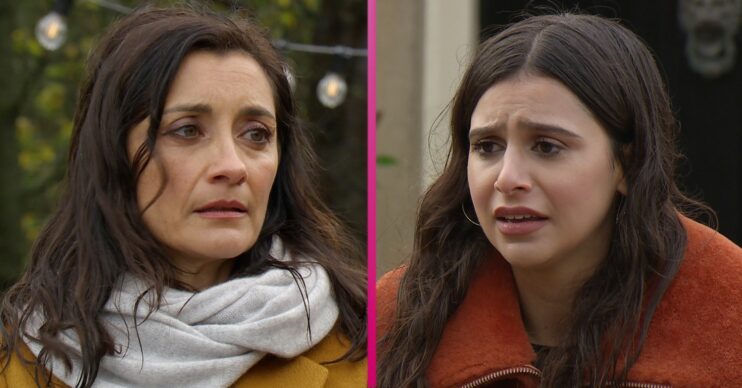 Viewers watched this week as Manpreet was left devastated when Meena turned on her.

As she tried to tell the truth about Meena impersonating Ethan’s mum in texts, Meena quickly blamed Manpreet – and blew her life and reputation up.

It destroyed her burgeoning relationship with Charles and left Ethan disgusted at her.

But it also gave Manpreet an insight into her sister’s secret behaviour.

And it will set her down the path of discovering the darkness that Meena has been hiding.

Now, actress Rebecca has revealed that Manpreet will report her sister to the police – or at least try to.

Speaking to Entertainment Daily and other media, she said: “I think she probably would when push came to shove.

“Meena refers to Manpreet as, ‘Always playing by the book.’

“She plays by the rules, she does the right thing, she’s well intentioned, so I think on that basis, I think Manpreet probably would.”

But will she get the chance to – or will Meena kill her first?

Fans have already spotted a chilling clue that Manpreet will be her sister’s next victim.

This week saw her move in with Wendy Posner – just like the last two of Meena’s victims.

One Emmerdale fan said: “Oh no Manpreet is moving into Wendy’s, does this mean she’s gonna be Meena’s next victim #Emmerdale.”

A second added: “Oh, no! Manpreet is moving in with Wendy, her last two housemates were killed by Meena, I can see what’s gonna happen…#Emmerdale.”

A third suggested: “Manpreet has moved into the ‘cursed’ house with Wendy. After losing everyone she loves. Is she next? #Emmerdale.”

Is it a hint that she will die next? Or is Meena’s reign of terror coming to an end?