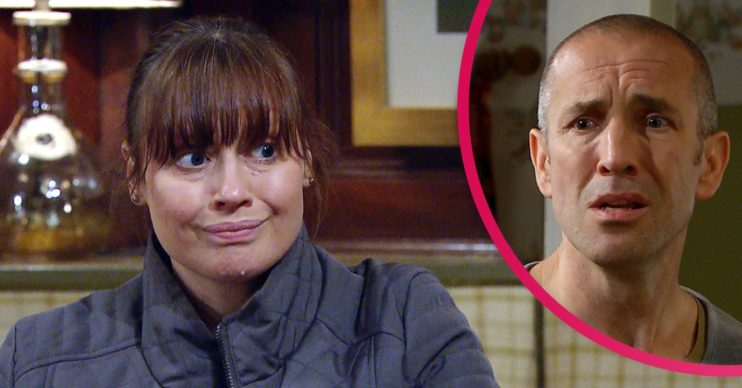 Emmerdale SPOILERS: Lydia to go to prison after she’s arrested?

Lydia is shocked when the police show up

Emmerdale spoilers reveal Lydia is arrested, leaving the Dingles shocked. Will she be okay?

In next week’s scenes Mandy encourages Lydia to apply for a pupil liaison job at a local school after her her successful counselling session with Vinny.

Mandy and Sam coach Lydia ahead of her interview in the café. But Lydia is left horrified when her computer becomes bombarded with dodgy pop-ups.

Afterwards Lydia is overjoyed with how well the interview went.

But she soon gets a shock when a police officer enters the café and arrests Lydia on suspicion of running a scam pension scheme.

The Dingles are furious when Nicola speculates that Lydia may be guilty.

The police officer soon escorts Lydia to the police station and she is terrified.

Sam erupts with anger when he realises who is likely to be behind the crime Lydia has been arrested for. Who could it be?

When Mandy hears Nicola has been spreading gossip about Lydia’s arrest she’s furious and confronts her.

Will Lydia be okay and could this effect her chances of getting the new job?

Meanwhile Vinny’s girlfriend Liv is still struggling with the guilt over Paul’s death.

Last month, Liv and Paul were in the wedding barn when Jimmy crashed his truck into the building.

Whilst Liv tried to help a trapped Paul, she realised the barn was going to explode, she realised she needed to get out of there.

Read more: What happened to Steve Marchant in Emmerdale? Fans predict he will return!

Liv managed to escape and survived. However Paul was rushed to hospital and eventually died from his injuries.

Later Mandy discovered that Paul had been abusing Vinny.

Next week Liv’s guilt intensifies over Paul’s death and she almost gives into the temptation of having a drink.

Will she open up to Aaron?