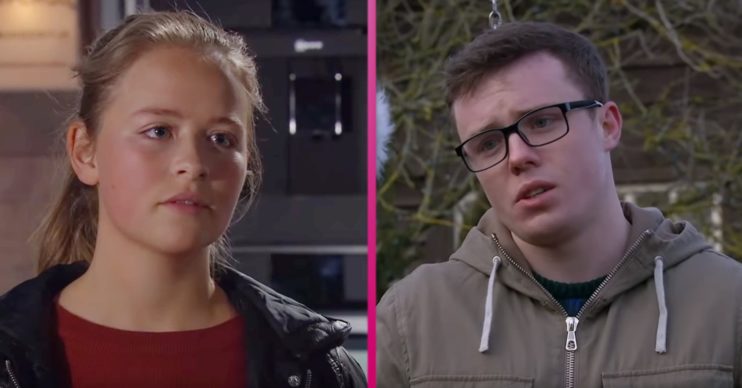 Emmerdale spoilers reveal Liv is left heartbroken after Vinny dumps her. But it soon becomes apparent that there’s more going on.

In this week’s scenes, Vinny discovers that his dad Paul was never kidnapped and the whole thing was set up by him and Connor in order to get money from Vinny’s girlfriend Liv.

But when Vinny threatens to go to Mandy, Paul attacks him leaving him unconscious and bleeding.

In next week’s scenes Paul is panicked to hear from Aaron that Liv is already at the hospital and has called the police about Vinny’s attack. He soon rushes over there.

At the hospital Vinny is on the verge of telling the police everything when he sees Paul approaching and clams up leaving the police unable to proceed.

When Paul starts to criticise Liv for calling the police, she is suspicious. Determined to stick up for her boyfriend, she insists they do something and questions Paul’s inaction.

Aware of Paul’s rising anger towards Liv, Vinny tells her to leave. Paul is pleased to have driven a wedge between them.

The next day under, the influence of Paul, Vinny has discharged himself from the hospital and heads back home.

When Liv arrives at the Dingles’, Vinny is wary to be alone with her. Cagey Vinny tries to stick to Paul’s story but panics when Liv mentions Connor.

Before a suspicious Liv can probe any further, Paul returns and tells Vinny to get Liv off their backs, or else.

Read more: Who plays Vinny in Emmerdale and when did he first appear?

Fearing for Liv’s safety, Vinny realises he needs to break up with her and ends their relationship.

Liv is shocked and heartbroken. But her distress turns to determination to find Connor and discover what he knows. Will she uncover the truth?