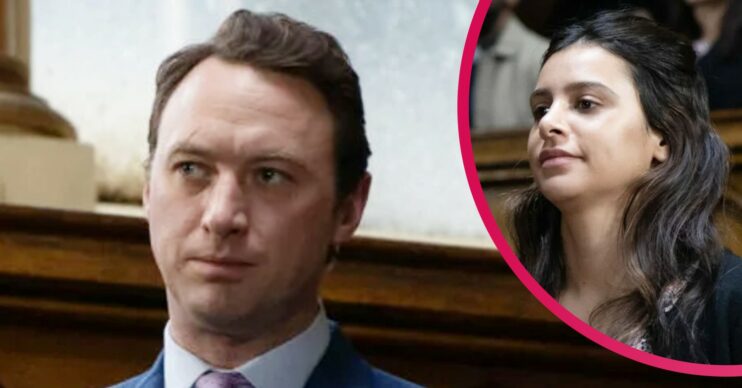 Emmerdale spoilers: Liam has a meltdown on the stand

Meena's trial gets too much

Spoilers for Emmerdale next week reveal Liam can’t control his emotions as he faces Meena in court.

So, does his meltdown on the stand seal her freedom?

Meena is in heaven as she enters the courtroom and sees her audience awaiting.

With the village on tenterhooks to see what sort of performance she’s planning to put on, Meena is loving the spotlight.

She fakes vulnerability and meekness and it certainly seems like the jury is lapping it up.

But will it be the key to her getting away with murder?

Liam takes to the stand in Emmerdale spoilers

Liam is the first to give evidence. Meena’s act throws him off guard and makes him angry.

He manages to contain himself at first and is overcome with emotion as he talks about Leanna.

His devastation as he fights to hold back the tears make the jury sympathetic to him. However, Meena’s defence hasn’t even started yet…

Things take a turn when Liam is accused of having an affair with Meena.

As she continues to act vulnerable and innocent, Liam struggles to contain himself. His rage gets the better of him and he lashes out.

Meena gets away with murder?

Liam is terrified his outburst has cost him the jury’s support.

He pins his hopes on Manpreet doing better, but she is also torn apart by the defence.

They paint her out to be a liar with a grudge and a devastated Manpreet doesn’t know how to fight back.

Meena, meanwhile, is relishing the spectacle she’s created. Seeing her sister suffer is a joy to her.

Although she’s advised not to take the stand herself, Meena insists she must speak out.

She gives the performance of a lifetime to an enthralled jury, but are they really taken in by her act?

As the verdict comes in, will Meena be found guilty of murder? Or will she get away with the more serious of her crimes?

Whatever happens, we don’t think she’ll go quietly – will it really end with a guilty verdict? Or does Meena have one more plan up her sleeve?

And where does Prison Officer Beeker fit in to her games?