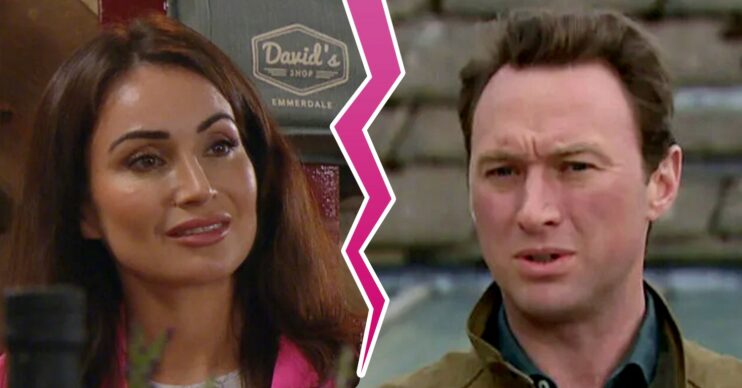 Emmerdale spoilers: Leyla and Liam’s marriage over as her drug abuse is exposed?

David catches Leyla out, but will he tell Liam?

Emmerdale spoilers for next week reveal Liam could be about to find out Leyla is doing drugs. But will it spell the end of their marriage?

Leyla is caught with a line of cocaine by David. Will he tell Liam?

And how will Liam react?

Read more: Emmerdale spoilers for next week in all-new pics

Leyla messes up in Emmerdale spoilers

Leyla has been battling a cocaine addiction for months now with no one, except Suzy, even noticing.

Husband Liam is convinced it’s booze that’s the problem and is helping her kick the habit. He has no idea he’s tackling totally the wrong substance.

David has noticed Leyla’s not been acting herself, though.

He pulls her up on her lack of interest in Jacob and accuses her of not being there for her son before he goes away to uni.

Guilty Leyla immediately offers to pay for Jacob’s accommodation, leaving him thrilled, but David even more suspicious. Leyla herself, meanwhile, immediately regrets the offer when her coke-fuelled high wears off.

Things get stressful for the wedding planner when she is bombarded with questions from Kim and Vanessa. Kim is so unimpressed, she sacks Leyla as her wedding planner.

Needing something to take the edge off her bad day, Leyla sets out a line. But just as she’s about to sniff it, David walks in.

Flustered Leyla desperately tries to explain her way out of it. But she’s been caught red-handed and David is fuming.

He decides Liam has to know so he can get her the help she needs.

Leyla is desperate and begs David not to say anything, sure it will spell the end of her marriage.

Liam later gets a message from David asking to meet, sending Leyla into a spin.

She tries to get hold of David before he sees Liam and pleads with him once again not to ruin her relationship with his revelation.

Leyla insists she has stopped coke and will never touch it again. But is David stupid enough to believe her?

Or will he do the right thing and tell Liam the truth about his wife?

And what will Liam do when he finds out? Is he going to step up and help Leyla beat her demons? Or will he leave her and end their union?

Is Liam and Leyla’s marriage over?