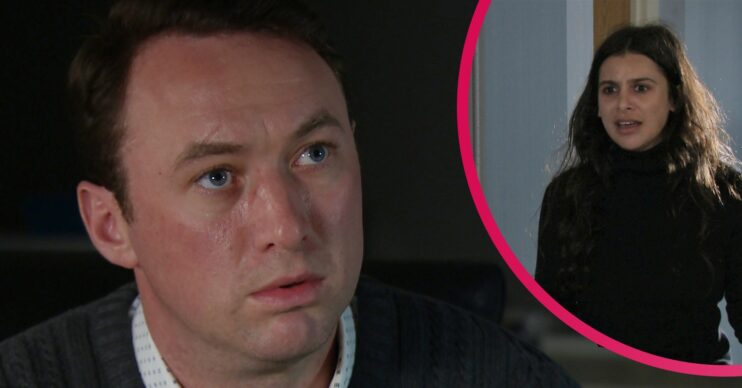 Emmerdale SPOILERS: Liam in danger as he confronts Meena

Liam gets closer to the truth

Emmerdale spoilers for next week reveal Liam confronts Meena about her fake pregnancy, but has he put himself in danger?

In next week’s scenes serial killer Meena is holding Manpreet and Vinny captive in a barn.

Meena uses Vinny’s phone to send Mandy a reassuring message to keep her off the trail.

Remembering he has his house keys in his pocket, he kicks them over to Manpreet just before Meena arrives.

Meena forces another dose of drugs on her sister and Vinny is terrified when Meena wheels in an IV set up, knowing the end might be near.

Meanwhile over at the doctor’s surgery, Liam is perplexed to discover that Meena’s medical records do not mention her pregnancy or miscarriage.

The next day Meena continues to fight the drugs in her system and finally manages to reach the keys.

Vinny loses consciousness before Manpreet manages to snap the cable ties on her hands.

When Meena returns to the barn, a freed Manpreet attacks her wounding Meena’s wrist with a piece of wood.

Soon an angry Meena regains the upper hand and subdues Manpreet before restraining her with fresh cable ties.

With the key now firmly out of reach, Vinny’s terrified to know their last chance of hope has faded away.

Later in the doctor’s surgery, Liam grows even more concerned about Meena when he sees blood seeping through the dressing on her wrist.

When Liam reveals to her he knows about her fake pregnancy, Meena is unsettled.

She threatens to accuse Liam of sexually harassing her at the surgery Christmas party if he continues digging through her business.

Returning to the barn, Meena tells Vinny and Manpreet that Liam’s interference has escalated her plans and today will be their final day alive.

Meanwhile Mandy’s anxiety rises when she finds out Vinny never turned up to a visit with Liv.

Meena drives the Dingle van into the barn. As she closes the barn doors, Manpreet and Vinny are terrified; aware there will be no escaping the exhaust fumes coming from the vehicle.