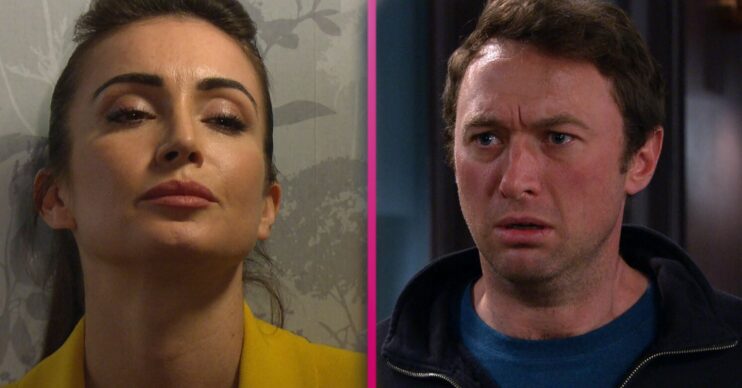 She finally opens up to him

Next week’s Emmerdale spoilers show Liam in shock after discovering wife Leyla has miscarried the baby he didn’t know they were expecting.

Poor Leyla has felt unable to be honest about her pregnancy, even when she realises something is terribly wrong.

Earlier this year, Liam was devastated when he discovered his daughter Leanna had died. However shortly after Leyla found out she was pregnant.

She’s so worried about putting more stress on Liam’s plate that she even goes it alone during her miscarriage.

So, how will Liam react when he finds out the heart-breaking truth?

The week begins with a tragedy for Leyla when she finally seeks medical attention for her worrying symptoms.

She goes to midwife Wendy for help and begs the concerned nurse not to reveal what’s going on to Liam.

Instead, she gets Wendy to book her a secret scan without running it past Dr Cavanagh.

It’s there that she discovers the baby hasn’t made it.

While Leyla is doing her best to protect him, Liam is getting more and more concerned about his wife.

He can tell something is going on, and he’s worried that Leyla is keeping things from him.

So, after Priya acts suspiciously during a chat, Liam confronts Leyla and begs her to open up.

But he’s floored when his destroyed wife reveals she was pregnant, but their baby is gone.

He’s still consumed by his grief for Leanna, so Liam has a lot to process as he takes in the devastating information.

Will this bring him and Leyla closer, or is it the final straw for their fragile marriage?