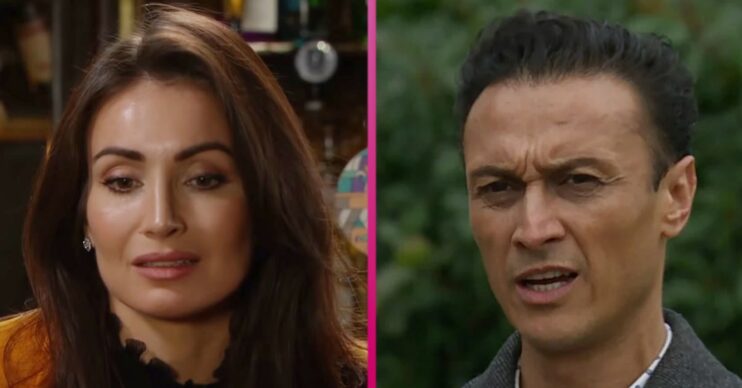 Emmerdale spoilers: Leyla and Jai to have shock affair?

It wouldn't be the first time they've cheated together

Emmerdale’s Leyla and Jai have a history, but could the soap be about to revisit it as they bond over the drugs scandal?

Leyla is hiding a very big drugs secret and Jai is currently getting the blame.

But could this spark a surprise affair for the former lovers?

Viewers are about to find out Leyla is hiding a cocaine habit.

But tonight (Thursday April 28) poor Jai was the one taking the blame after Laurel discovered drugs at Take a Vow.

With Emmerdale spoilers for next week revealing Leyla has a coke addiction, it’s clear the little bag of powder belongs to her.

However, no one in the village knows that yet!

And Jai has had the finger firmly pointed at him.

It has caused the breakdown of his relationship with Laurel and even his family don’t believe he’s clean.

Leyla walked into the pub as Jai was being confronted and brazenly suggested he was to blame. She even said he should take a drugs test, which he agreed to do.

However, when Laurel walked out on him, Leyla gave Jai a guilty smile – could her guilt drive her to comfort him?

A shoulder to cry on

Certainly next week, she steps in to support Jai.

She insists she doesn’t believe the drugs were his and even offers to hold a client hen-do at The Hide to help the ailing business get some income.

Jai is grateful for her support, but could it lead to more?

The former addict is already struggling with his own recovery, could the discovery Leyla’s on coke make Jai turn back to it too?

Will their shared addiction give them something in common and see them start up a shock affair?

And where does this leave Liam and Laurel?

When were Leyla and Jai together in Emmerdale before?

If they do begin an affair, it wouldn’t be the first time!

Leyla engaged in a bit of harmless flirting with Megan’s then-boyfriend, Jai.

But the flirting soon lead to kissing, which lead to sex, which became a full-blown affair.

Megan found out and Leyla and Jai ended things. However, they rekindled their romance and Jai promised to leave Megan and marry Leyla.

Rachel and Jai were locked in a custody battle for Archie at the time and Leyla also overheard Jai’s threat to murder Rachel. She gave evidence at the custody hearing, causing Jai to lose Archie.

Leyla eventually ended her affair with Jai when she believed Megan had miscarried their baby.

But could it be back on again?