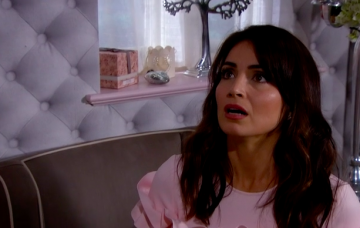 Just as Leyla convinced herself he didn't care, Clive turned up on her doorstep

Lelya Harding is in for a shock next week in Emmerdale when her fiancee Clive makes an unexpected visit.

The wedding planner found herself accidentally stealing a client’s intended shortly before their nuptials, and fleeing from her wrath.

But when the client Susie makes a shock appearance in the village to reclaim property she claims Leyla stole, she’s knocked for six.

And when she opens up to Megan about how she’s feeling about Clive and his behaviour, she’s left even more shocked when he walks through her door.

Read more: Emmerdale fans convinced Leo is being bullied by own family member

And on Wednesday’s episode things are tense at Take A Vow as clients start to cancel due to Clive’s ex-Susie leaving a scathing review about Leyla.

Megan is furious with Leyla, but Leyla is too upset over fiancé Clive, angry at herself for believing he ever loved her, and then he appears with all the answers. But will she forgive him?

Viewers know that Leyla left the village in January, while actress Roxy Shahidi was on maternity leave.

Leyla met Clive while holidaying in Greece and they have since become engaged, but his revenge-seeking ex accused Leyla of stealing him and arrives in Emmerdale to cause chaos.

At the moment, Tom is only scheduled to appear in Emmerdale for a few weeks.

The actor is well used to the pressures of working on a long-running serial drama, having spent 11 years playing medic Sam Strachan.

The doctor had something of a reputation as a Lothario, stringing various female colleagues along and fathering a child with his boss Connie Beauchamp.

He has most recently been performing in the West End musical Crazy For You, opposite Claire Sweeney.

Are you looking forward to seeing Tom join the cast of Emmerdale? Leave us a comment on our Facebook page @EntertainmentDailyFix and let us know what you think!