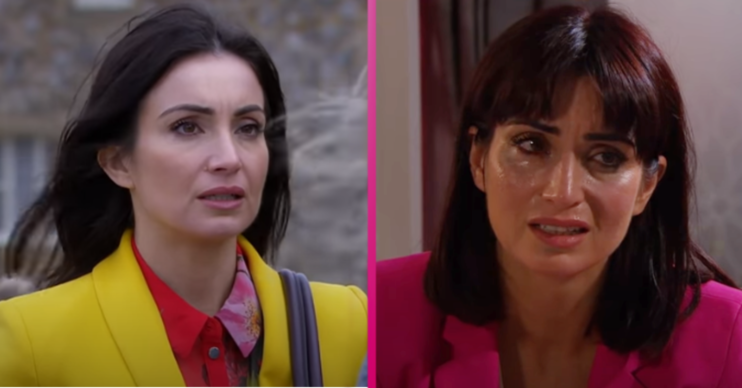 Someone shows up in the village for Leyla

Emmerdale spoilers reveal Leyla discovers who has been tormenting her. But what will she do next?

Over the last few weeks, Leyla has been harrassed by an unknown person. This person has been leaving bad reviews online about her business and even destroyed one of her presentations for a client.

In next week’s scenes in the soap, David is embarrassed about using a dating app. But he soon bumps into a man named Gaz in his shop buying breath spray.

Gaz tells David he’s going to meet a woman for a date. However David panics when he realises the woman Gaz is referring to is Leyla.

David is confused, believing Liam and Leyla are now back together.

David and Jacob are baffled to learn about the hook up and can only watch in shock when they see Gaz approach Leyla across the village.

Leyla meets this mystery man outside of her office but seems somewhat confused by the meeting. But as she lets him into the building, confusion hits its peak.

Read More: Emmerdale’s Charley Webb teases exciting new project which has been in the pipeline for 10 years

Both in the office and outside in the village, wires become crossed. Will Leyla work out what’s going on?

Emmerdale Leyla: Someone breaks into Take A Vow

Later, Leyla overhears a noise in Take A Vow and is blind-sighted by a dark figure who jumps out at her. The businesswoman manages to strike a blow on the assailant, but they escape.

The police are called, but it’s not long before the penny finally drops for Leyla and she realises who her tormentor is.

Whilst Leyla has been tormented by this unknown person, actress Roxy Shahidi has spoke about how her character starts to piece things together and realises someone is messing with her.

Speaking to Entertainment Daily and other media at a virtual press event, Roxy said: “There’s been a few things and I think she does put them all together quite quickly and fear that it’s all part of a bigger picture because she’s had these really bad reviews, which has happened before which she suspected Kim for.

“And then suddenly this guy turns up and she obviously didn’t put herself on this website so that’s happened. Then also the fact that her diary has gone missing and she can’t access her online diary. You know so there’s just lots of little things, but they’re very personal.

“You know you would’ve had to be in the office in order to access the computers, you’d have to know her quite personally in order to get that image and put her on the dating website. And you’d also have to have a lot of animosity, so I think she puts it all together quite quickly.”