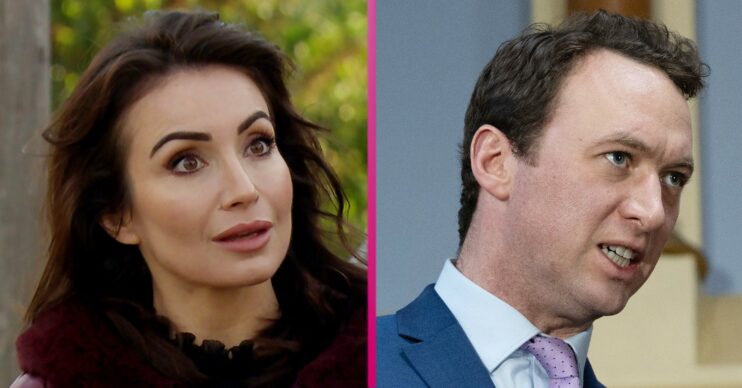 Emmerdale spoilers: Leyla confronted as she hides a shock secret

Emmerdale spoilers for next week reveal Leyla appears to be hiding a huge secret.

Meanwhile Meena’s trial begins next week and Liam takes the stand. But what is Leyla’s secret?

Tensions spike when Meena enters the courtroom, basking in the spotlight.

Liam is finally ready to testify but is thrown off by Meena’s false meek behaviour.

As Liam fights back tears, the jury appear to be sympathetic.

Read more: Emmerdale: Who plays Meena’s prison officer? Where have you seen Dean Smith before?

But as the defence starts to throw accusations, Liam is blindsided when he’s accused of having an affair with Meena.

Aggravated by her feigned vulnerability, Liam’s rage soon gets the better of him and he lashes out at Meena in court.

Liam is left worrying his outburst may have lost him the support of the jury.

The next day, Manpreet takes the stand to testify against her sister. It’s tough as the defence dives deeps into Manpreet’s past and attempts to make her out to be a liar.

Manpreet is infuriated to see her sister relishing in her misery.

However she’s eager to get into the limelight, Meena rejects the advice and prepares for the next day.

Meena rehearses her lines in her cell.

Soon Meena is playing the part of the victim as she takes the stand in court.

She delivers the performance of a lifetime to an enthralled jury.

Later the court is consumed in tension as they await the verdict.

The shocking events of the trial hit the morning news.

Meanwhile Wendy quizzes Leyla about her whereabouts the day before. Is Leyla hiding something?

Could it be connected to Liam and the court case?

Read more: Emmerdale in 2022: Who’s leaving and who’s arriving in the village this year?