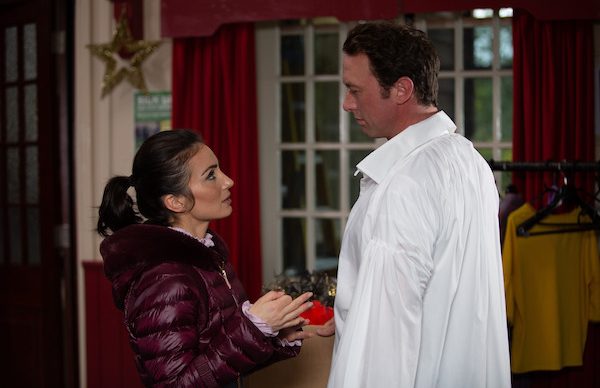 There's romance in the air...

Sparks have been flying between Liam Cavanagh and Leyla Harding ever since they were cast in the Emmerdale pantomine together. But are Leyla’s Christmases about to all come at once as the pair come close to sharing a romantic kiss?

Liam was left heartbroken over Bernice’s sudden departure from the village on the eve of their wedding day, but he has been trying to distract himself by focusing on the Emmerdale pantomime instead.

But what he didn’t expect was for a bit of fun like a village play to turn into a romance.

As Christmas approaches Leyla and Liam find themselves spending more and more time together, and when Liam ropes Leyla into helping with a children’s party it seems there is a spark igniting between them.

When Mandy and Kerry don’t show up for work, Liam is at a loss about how to host a kids’ spa party, and persuades Leyla to help him out.

Leyla thinks it’s hilarious as Liam steels himself to do manicures on all the children, and soon he is putting his best hair-braiding skills to the test, leaving Leyla falling for him all over again.

As Liam’s popularity amongst the kids grows, so does Leyla’s adoration for the doctor.

But with the pantomime fun coming to an end, she’s worried that her excuse to spend time with Liam is also coming to a close.

However, as chance would have it, once the party finishes it seems Liam might be thinking the same thing, because the attraction between them grows and they both struggle to fight it.

As the pair find themselves fighting their attraction for each other – will they give in?

Could this be the start of a new romance, or will one of them make a run for it before anything can really happen?

Do you think Liam and Leyla make a good couple? Leave us a comment on our Facebook page @EntertainmentDailyFix and let us know what you think!