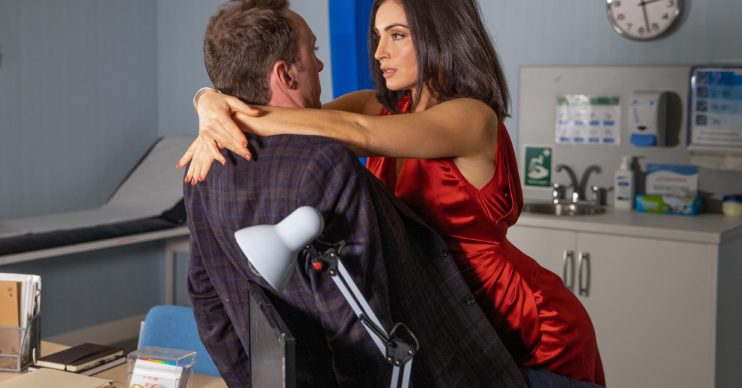 Will it pave the way for Liam and Leyla to get back together?

In next week’s Emmerdale, Leanna makes an apology to Leyla. But what does this mean for Leyla and Liam?

In the upcoming scenes, Jacob fears things are over for him and Leanna for good.

But Leyla is taken back when Leanna approaches her and offers an apology for interfering in her and Liam’s relationship.

Is she giving them her blessing? Could Liam and Leyla get back together?

Liam and Leyla began a relationship at the beginning of this year. However because he had not long split with Bernice, who went to Australia, his daughter Leanna was not impressed.

Despite her asking her dad to stop dating Leyla, they continued to sneak around. When Leanna found out she was furious and accused the doctor of putting women first.

Leanna and Liam’s relationship became strained he was forced to move out of Diane’s and in with Leyla.

A couple of weeks ago, the father and daughter started to get things back on track. But when someone broke into Take A Vow and destroyed Leyla’s presentation, Leyla immediately presumed it was Leanna.

Read More: Coronation Street and Emmerdale child actors will be absent after lockdown

Furious, Leyla went on the warpath and confronted the teenager. However as Leanna began to hurl insults at his dad’s lover, Leyla slapped her across the face.

Liam later told his girlfriend he was in a difficult position and needed to fix his family before embarking on another relationship.

But as Leanna apologises to Leyla, is there a chance they will get back together?

Read More: Emmerdale SPOILERS: Cain left devastated as Moira flirts with someone else

During Leyla and Leanna’s feud, Jacob tried to get Leanna to see that his mother isn’t so bad.

But what does Liam and Leyla’s failed relationship mean for the teenagers?

Would you like to see Liam and Leyla get back together? Leave us a comment on our Facebook page @EntertainmentDailyFix and let us know what you think of this story.