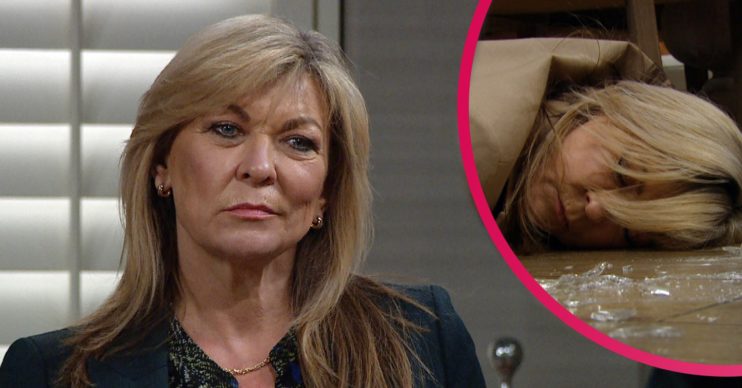 Emmerdale spoilers reveal Kim Tate collapses. Has she got a mystery illness and will she be okay?

Over the last few weeks, Gabby has been living at Home Farm. But after an argument ensues between Gabby and Kim, Kim’s health takes a bad turn.

In next week’s scenes Kim’s unnerved when Jamie and Andrea turn up to tell her they’ve amicably settled their divorce. But Jamie reveals he’s given up Dale View so he can keep Millie close.

Later when Jamie finds Kim and Gabby arguing about the loss of Dale view, he fires some parting shots at his mum before heading off.

He leaves Kim seething and she soon turns on Gabby. But Kim is feeling woozy and disorientated and attempts to kick Gabby out of the house.

Swigging brandy, regretful Kim tries to tell Gabby she doesn’t actually need to leave. But Gabby is hurt and heads out without saying a word.

As the door slams, Kim loses her balance and collapses to the floor as she loses consciousness…

The next day, Lydia arrives and is alarmed to see Kim lying lifeless on the floor. Kim opens her eyes in panic and a worried Lydia tells Kim she needs to see a doctor.

However Kim refuses. She’s privately terrified that she could be seriously ill and starts looking at something on her laptop.

When Gabby pitches up she knocks the laptop and reads what it says aloud: Kim comes clean and shakily opens up to Lydia and Gabby.

Meanwhile Jamie offers Noah a job. But it’s clear he’s up to something.