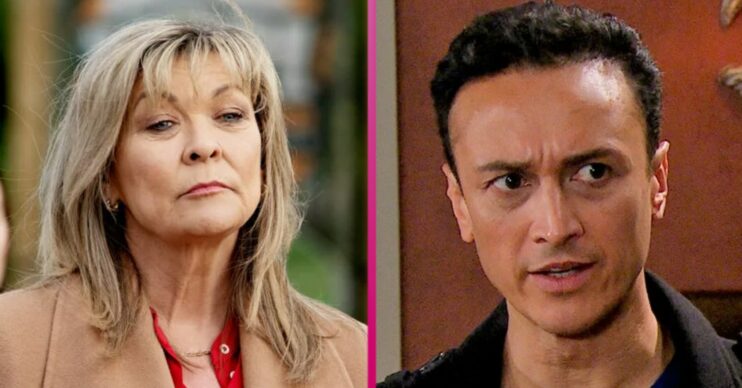 Is Jai back on drugs – or has Kim taken a terrible revenge?

Emmerdale spoilers for next week reveal that Kim Tate may be back to her scheming best – as it looks like she has taken a terrible revenge on Jai Sharma.

But has Kim really done her worst? Or is there another explanation for what befalls Jai?

With Emmerdale‘s Kim Tate, anything is possible!

Kim and Jai have trouble with the HOP workers, who are outraged at the new zero-hours contracts that Kim wants to implement.

Furious to see a picket line, Kim tells Jai to sort things – or else!

However, Jia and Laurel decide to team up to sort things in a different way.

Meanwhile, with no choice, Kim is forced to turn waitress for a posh friend who arrives looking for a coffee. And you can imagine how that makes her feel…

Jai and Laurel meet up with Kim, and present her with facts and figures about why the new contracts might not be as beneficial as she thinks.

Laurel hopes they’ve won Kim over with their argument.

Impressed by how Jai has behaved, she later tells him she wants them to get properly back together.

Jai is shocked but delighted and readily agrees.

However, it’s clear that Kim isn’t happy about how events have played out.

Jai is on top of the world. However, any celebrations are put on hold when he discovers he has lost his wallet.

Realising the last place he had it was in Take A Vow, he and Laurel head back there to look for it.

They find the wallet down the back of a chair. But they get more than they bargained for when they also find a small packet of drugs.

Of course, all eyes are now on Jai as Laurel fears he’s secretly relapsed.

Jai protests his innocence and thinks the only rational explanation is that Kim planted the drugs.

Read more: How many times has Kim Tate faked her own death?

Once Laurel has calmed down, she finally starts to believe Jai, much to his relief.

However, Jai’s soon back to square one after Rishi reveals to Laurel that Jai almost relapsed a few months ago.

When Rishi also tells Laurel that the kids almost caught Jai with drugs, it’s the last straw for Laurel.

She’s furious, and Jai realises he has lost everything.

Later at work, Jai and Laurel bicker, leaving Kim to put both of their jobs under threat.

Has Kim masterfully carried out a scheme to make Jai and Laurel pay?

Or is there another explanation for the shocking events?

Just who do the drugs belong to?