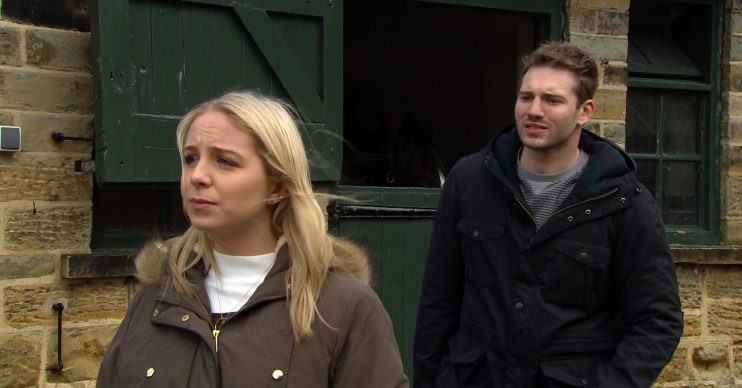 Jamie has been sleeping with Belle and Andrea

In upcoming Emmerdale episodes, Jamie finally makes a decision over who he wants.

This week, Belle is taken aback when Jamie declares that he loves her and tells her he’s going to leave his wife Andrea.

Although she’s initially scared, Belle reciprocates, sharing her feelings as the two share a kiss.

But how will Andrea react when Jamie ends things with her?

How did Jamie and Belle’s affair start?

Over Christmas, Jamie learnt that Andrea had slept with Graham Foster nine months before their daughter Millie was born.

He found out that Andrea knew there was a chance that Millie wasn’t Jamie’s child.

Although a DNA test proved Jamie was the father, he was furious at his wife for not telling him the truth.

As they split, Jamie grew close to friend and colleague Belle, and on the night Graham died, Belle and Jamie slept together.

The two decided to keep things quiet, because Jamie was about to go into a custody battle with Andrea and Belle has a boyfriend, Ellis.

But when Jamie and Andrea decided to give things another go, Belle became jealous and confronted Jamie.

The two ended up sleeping together again. However, Jamie realised if he didn’t want Andrea to find out and wanted to avoid temptation, he would need to keep away from Belle.

In order to do so, he got her fired from the vets. But it didn’t work as the pair soon slept together again in a stable.

Will Andrea and Ellis find out about Jamie and Belle?

If Jamie and Belle want to have a proper relationship, it would be pretty hard to keep a secret from Andrea and Ellis.

However, the soap haven’t confirmed if they find out about Jamie and Belle’s affair.

Do you think Jamie and Belle make a good couple?