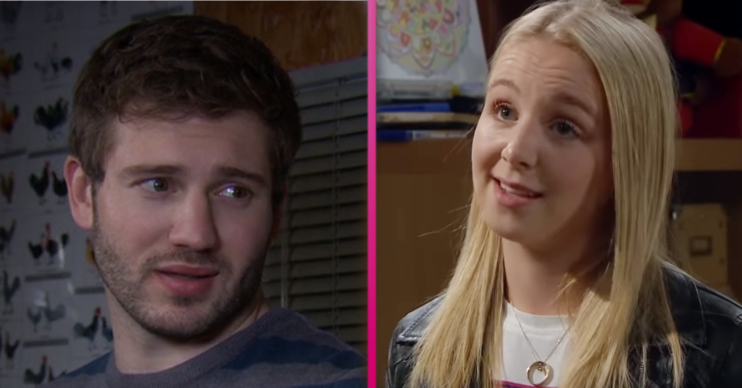 Emmerdale spoilers reveal Jamie confesses all to Belle about the hit and run and Andrea’s blackmail. But how will she react?

A couple of weeks ago, Jamie ran over Moira and left her on the side of the road. He later told his wife Andrea about what happened, but she used this as blackmail material to make Jamie stay with her.

In next week’s episodes, Belle’s troubled when Jamie turns up at the vets in a terrible state.

He begs her to hear him out. Jamie tries to explain to her that he has feelings for her and Andrea is blackmailing him.

But he ends up confessing that it was him who was behind the hit and run on Moira and Belle is left reeling from Jamie’s revelation.

She threatens to go to the police and is surprised that Jamie seems almost relieved by the idea.

The next day at the Dingles’ house, Belle is defensive when Lydia suspects that she might be seeing the vet again.

However, Belle becomes increasingly convinced she should report Jamie to the police. How long will it be before the truth comes out?

And how will Cain react when he finds out it was Jamie who ran over Moira?

A few weeks ago, Andrea let slip to Jamie’s mum Kim that Jamie was the one who hurt Moira.

After finding out the truth, she told Andrea they needed to get rid of the evidence. However, Andrea made it clear she holds all the cards.

Currently, Kim is away from the village and Jamie has been left alone with Andrea.

The vet appears to be going along with Andrea, pretending to be happy that they’re back together.

But how will she react if she finds out Belle knows the truth?