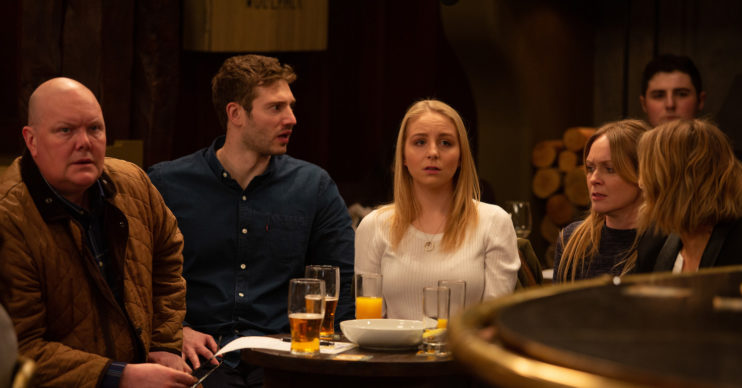 In next week’s Emmerdale, Jamie and Belle’s affair is exposed in front of everyone in the Woolpack.

For weeks, Andrea has been aware that her husband is sleeping with his colleague Belle. But she ramps up her plan and gets her revenge.

In upcoming scenes Andrea struggles to see Jamie and Belle together. But it soon becomes apparent that she has a plan to tear them apart.

Exposed in front of the Woolpack

At the Woolpack, Leyla collects everyone’s phones for the pub quiz but she discreetly pockets Belle’s phone and a USB stick.

Soon everyone in the pub is shocked when the quiz screen is filled with a screenshot of texts between Belle and Jamie.

Seeing the messages, it becomes clear that Jamie and Belle are more than just work friends.

Andrea pretends this is the first she is hearing about the affair and flees in disgust.

Meanwhile Jamie blames Belle for outing them. What does this mean for them?

Later, Jamie panics when Andrea disappears with their daughter Millie. While Kim tries to keep him calm, they receive more bad news.

Tracy turns up and reveals Andrea left without her purse, cards, money or car leaving him even more worried.

Where has Andrea gone?

Jamie and Belle began sleeping together earlier this year when he was split from Andrea. But despite Andrea and Jamie getting back together, he has continued his affair with Belle.

Andrea discovered Jamie’s infidelity during the Easter egg hunt after catching them kissing. But instead of confronting them, she has been plotting her revenge for weeks with the help of friend and colleague Leyla.

But has she taken the ultimate revenge on Jamie by fleeing Emmerdale with their daughter?

What do you think has happened to Andrea? Leave us a comment on our Facebook page @EntertainmentDailyFix and let us know what you think of this story.