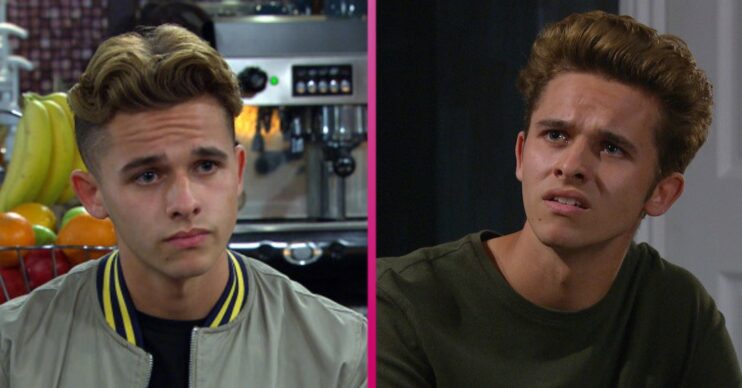 Jacob Gallagher will make a life-changing decision next week on Emmerdale.

The student has been left devastated by the death of his girlfriend Leanna Cavanagh.

Viewers know she was murdered by serial killer Meena Jutla – but Jacob and the villagers think it was simply a tragic accident.

After being banned from her funeral by her dad Liam, Jacob got together with friends to pay his own respects to Leanna.

Next week he will want to begin to move forward with his life – and decides to leave education.

He tries to talk to his mum Leyla Harding – but she’s distracted by her own shock pregnancy – and in the end he opens up to Liam.

The pair mend their differences and Liam gives him some advice.

But what will Jacob do if he gives up on his A Levels?

Actor Joe-Warren Plant has revealed Jacob is at a loss of what to do.

“I’m not really too sure what’s next for Jacob going forward,” he said.

“No doubt it’s going to take him a while to recover from what’s happened.

“He hasn’t been fully happy since everything that occurred with Maya and now he’s had another layer of his character stripped away from him with the trauma of Leanna.

“But hopefully he can soon get back to his old happy, enthusiastic self.”

Emmerdale’s Jacob to rely on his friends and family

However, he does have his friends and family around to help him.

The actor said: “Jacob is cared for by a lot of people in the village, obviously David and Leyla, but also his friends.

“Gabby, Liv, Amelia, Sampson all helped to create the send off he would have wanted for Leanna’s funeral.

“Although it’s going to be very hard for Jacob there will be people by his side the whole time.”

But he did admit that it may take Jacob a while to get out of the dark place he finds himself in.

He said: “Although Jacob ended up jetting off to Portugal for a while, I really do think he felt something for Leanna as he came back with a ring ready to propose.

“Whether that was the right thing to do, probably not, he is still very young. But now she’s gone Jacob is going to feel huge amounts of regret and remorse for the way he acted.

“He feels he should have cherished her more and never have left her. I don’t think Jacob will ever get over the trauma fully.

“However, he has people always willing to pull him out of that dark place.