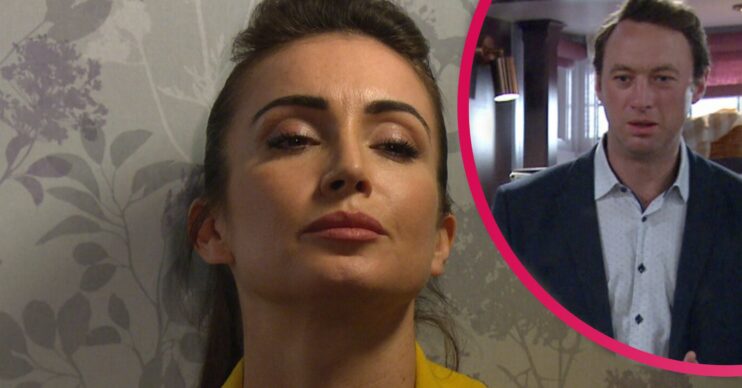 Emmerdale SPOILERS: Is Leyla having a miscarriage?

Emmerdale spoilers for next week show pregnant Leyla in turmoil as she fears she’s miscarrying her baby.

It looks like there’s heartbreak ahead when she begins to experience some worrying pains.

Father-to-be Liam doesn’t even know that his new wife is expecting their baby.

Will they get a chance to be parents, or will Leyla lose her child?

Ever since she found out she was pregnant, Leyla has been worried about telling Liam.

She hoped a baby might start to heal his shattered heart, but things took a turn.

Liam discovered a pregnancy test in their home and confronted his wife, who panicked and lied.

She told Liam it belonged to colleague Andrea, and he floored her by expressing his relief that she wasn’t pregnant.

Leyla covered her heartbreak as Liam told her he couldn’t imagine having more children after losing Leanna and resolved to keep it a secret.

Read more: How many kids has Leyla Cavanagh got in Emmerdale? How many times has she been married?

But after a couple of weeks of turmoil, Leyla now fears another tragedy is going to happen.

How will Liam react when he finds out what Leyla’s been going through?

In the weeks since he lost daughter Leanna so tragically, Leyla has tried to protect Liam.

She believes that keeping the baby a secret is in his best interests.

But now she’s in the horrible situation where she fears she’s miscarrying, Leyla needs Liam.

It’s not just his medical expertise that would be invaluable, but no pregnant woman should have to go through this terrifying situation alone.

Sadly, Emmerdale spoilers show that Leyla’s first thought is not for herself.

Instead, she’s still worried about how to protect Liam from more pain.

Is Leyla having a miscarriage, or is this a false alarm?

Have you been watching Leyla’s storyline in Emmerdale? Leave us a comment on our Facebook page @EntertainmentDailyFix and let us know what you think!