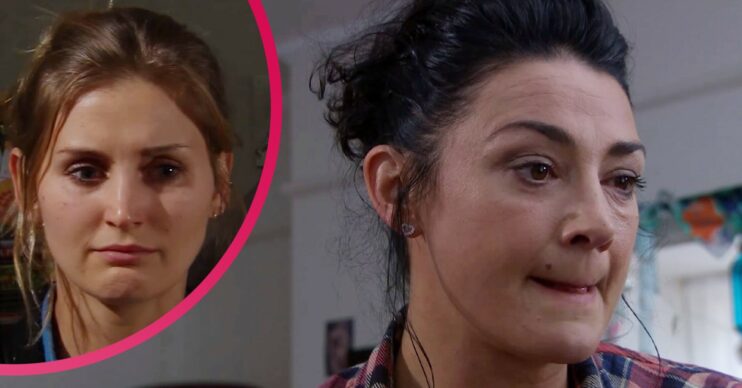 Emmerdale spoilers for next week reveal Moira is set for more upset when she is reminded of daughter Holly’s death.

A chat with Suzy brings up painful memories for the farmer, but how will she react when she finds out Suzy’s secret connection to her daughter?

An innocent business meeting kicks off a range of emotions for Moira when Suzy pressures her.

Things start well when Suzy suggests Moira hire out her barns as a wedding venue. Inspired Moira thinks it’s a great idea and they are quickly on the way to starting a new partnership.

However, Suzy then pushes to use the surrounding fields as well, but has no idea she’s put her foot in it.

Asking about using the field where Holly is buried, Moira goes quiet. It’s clear the memories are still raw and painful.

Leyla steps in and nods towards a photo of Holly to signal that all is not well. The exchange leaves Suzy dumbstruck…

It’s not long before an unsettled Suzy leaves abruptly from the farm. Leyla is confused and goes after her business partner.

She finds her in the cafe and sees that Suzy is looking at an online remembrance page for Holly.

Suzy admits she knew Holly and begins to open up.

Leyla is overwhelmed by what Suzy has to say. But will it make Leyla see the error of her own drug-taking ways?

What happened to Holly?

She became addicted to drugs, but eventually got clean after her parents did all they could to help.

She went on a methadone programme and got a job at the factory.

When her dad, John, died she relapsed, but insisted it was a one-off. She later left the village for a fresh start in London.

Holly returned in 2016 in debt due to being back on drugs. She quickly became infatuated with Moira’s husband, Cain, and when he rejected her she relapsed on heroin again.

She got clean once more and bonded with fellow addict Jai Sharma. The couple started a relationship and Holly began a photography business.

When they attended a wedding together, Holly relapsed again.

This time it killed her.

The tragedy is never far from Moira’s mind. Will the revelation that Suzy knew her daughter stir up all sorts of pain for Mrs Dingle? And will she work out what Leyla’s been up to once she realises?