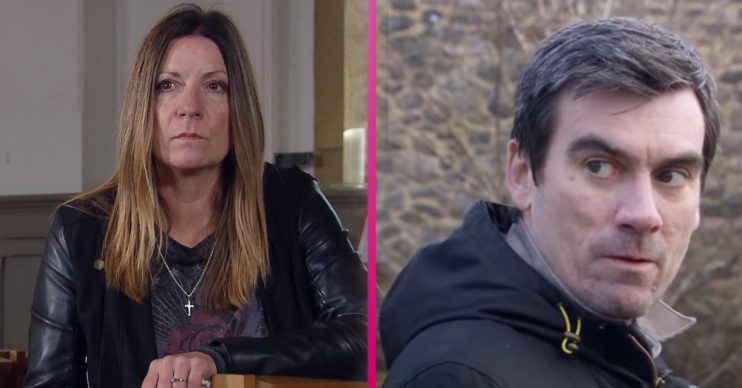 Cain knows how bad Malone can be

Emmerdale spoilers reveal Harriet is on the verge of telling Cain what really happened to DI Malone. But will she confess all?

A couple of weeks ago, Dawn shot dodgy detective Malone in self defence when he came after her and Harriet. Although Harriet disposed of the body, Dawn is struggling to keep the secret.

With Will still unaware about what happened to Malone, he’s paranoid he’s seen him hanging about.

As Harriet heads off to a religious retreat, Dawn tries to calm Will down but he refuses to listen and makes an urgent furtive phone call. What is he up to?

Read More: Kelvin Fletcher rules out return to Emmerdale after being spotted on set

Later Dawn sees Will picking up a gun from an old friend of his and demands an explanation.

Dawn warns Will reminding him what happened last time he brought a gun into the house. But his panic regarding Malone just gets worse.

Emmerdale: Harriet confesses all to Cain?

Elsewhere on Main Street, Cain notices the church door has been left open and goes to investigate. Inside, he finds Harriet, who has returned from her retreat.

He notices her sobbing, but will she confess all to her old flame?

Fans of the show know Cain was one of the ones Malone manipulated into doing dodgy jobs. What would Cain say if he found out the truth?

Emmerdale: Dawn confesses to Will

Back at Woodbine, things reach tipping point and Dawn finally reaches the end of her tether and she reveals the truth – she killed Malone.

Will reels asd Dawn tells the story, tactically editing out Harriet. But the vicar walks in on their conversation.

Will she reveal her own involvement and admit to having an affair? How would Will react?

And how will he react knowing his daughter killed the police officer?

What do you think Harriet should do? Leave us a comment on our Facebook page @EntertainmentDailyFix and let us know what you think of this story.