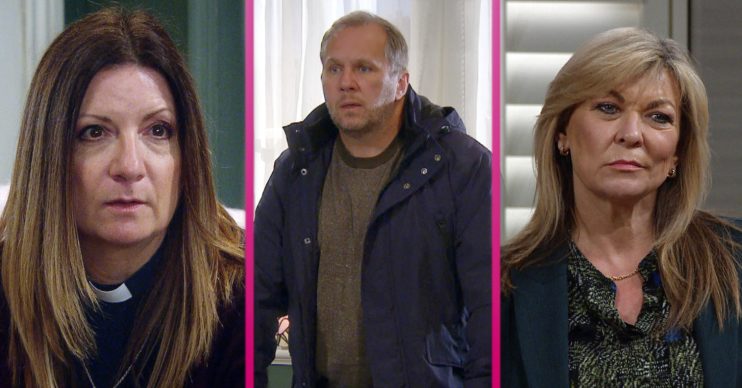 Emmerdale SPOILERS: Harriet broken-hearted as Will sleeps with Kim

Harriet is still in the cellar

Emmerdale spoilers reveal Harriet is left broken-hearted when she hears Will and Kim together.

This week, Harriet put herself in self-isolation, feeling she needed to be punished for Malone’s death.

In next week’s scenes, Harriet is still in self-imposed exile.

Will pays her a visit in the cellar and sees she has packed up her belongings and hopes she’s going to leave her bunker, but Harriet is unsure, reluctant to commit.

Hearing Kim enter Woodbine through the unlocked front door, demanding to know what’s going on, they freeze, fearing they’re about to be discovered.

Will sneaks back upstairs and pretends to enter from the back door. Will lies to Kim telling her that Harriet wanted him back then took off when he rejected her.

Sympathetic, Kim opens up about the problems in her own life. She soon makes a pass at Will and he prepares to reject her until they’re distracted by a noise in the cellar, leaving him panicked.

Meanwhile in the cellar Harriet quickly picks up the battery she knocked off the table and she strains as she listens to Kim and Will.

When Kim wants to investigate the noise in the cellar, Will tries to turn her attention away by suggesting they head upstairs. Kim’s excited while Will steals himself.

Afterwards, heading back downstairs with Kim, Will is still painfully aware of Harriet in the cellar.

When a satisfied Kim suggests they meet at her place next time, Will is stricken to realise that she’s expecting a repeat performance.

After Kim leaves, Will heads down the cellar to check on Harriet. He defends his actions with Kim as a necessary distraction.

But will this make a heartbroken Harriet regress?