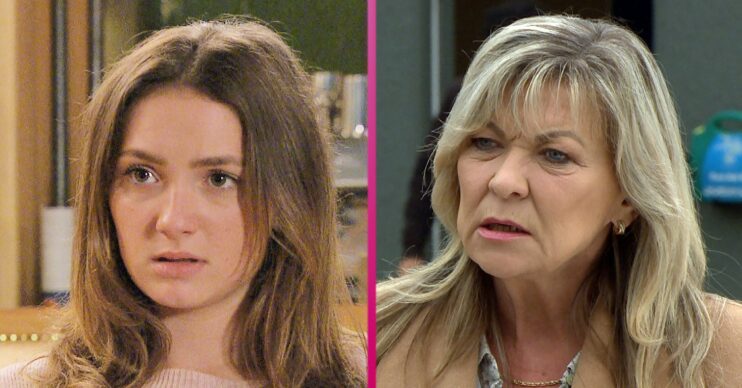 Emmerdale spoilers for next week reveal Gabby returns home and panics when she can’t find Thomas.

She fears Jamie has returned and taken their son, but is she right?

Last year, Emmerdale villagers presumed Jamie Tate had died when he crashed into a lake and his body was never found.

Later Jamie’s ex-wife Andrea was murdered and after her memorial viewers found out Jamie was alive when his daughter Millie went to live with Andrea’s mum, Hazel.

A couple of weeks ago Millie and Hazel came back to the village for Thomas’s christening.

However when Gabby overheard Millie give Thomas a secret message from their dad about seeing him.

Gabby confided in Dawn that she believes Jamie is alive. They decided to go to Hazel’s and although no one was home, they broke in to have a look around.

Gabby found Jamie’s watch and realised he was still alive. The two women decided to keep what they know a secret. But next week Gabby fears Jamie is back and trying to take their son.

In next week’s scenes Gabby returns home and finds no sign of Thomas or Amelia, who is meant to be looking after him.

She secretly fears that Jamie is back and has taken baby Thomas.

Dawn tries to reassure Gabby saying Jamie won’t return, but privately she is wondering. Later she keeps some news to herself.

Is Jamie coming back?

When it was revealed Jamie was still alive, Emmerdale insisted there were “no plans” for him to come back to the show.

However, in an online press event earlier this year, Entertainment Daily discovered Kim could learn the truth about Jamie this year.

Producer Laura Shaw said: “Up at Home Farm, we know that Jamie Tate is actually still alive, of course. So obviously that information is still to come out.