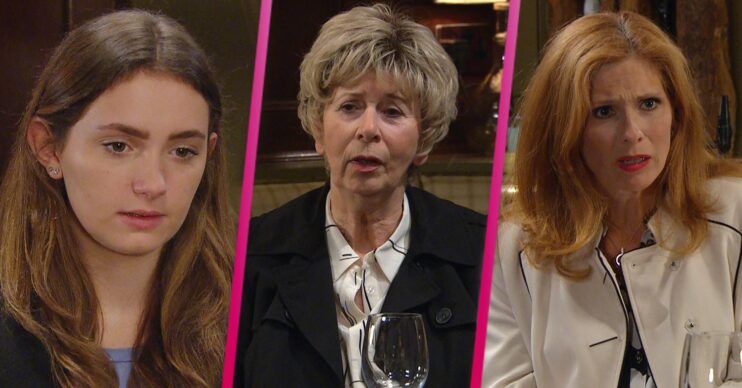 Emmerdale SPOILERS: Gabby and Diane plan to flee, but will Bernice ruin everything?

What will Bernice do?

Emmerdale spoilers for next week reveal Gabby and Diane plan to flee the village, but will their plans be ruined?

Recently Gabby was left heartbroken when Jamie, the father of her unborn son, crashed his car into a lake.

Although his body wasn’t found, most have presumed him dead, except for Kim, who believes he survived and is getting back at her for faking her death earlier this year.

However next week it seems Kim has her own plans for Jamie and Gabby’s child.

Next week Kim suggests that Gabby draw up a will, giving her sole parental rights to her child.

Later Gabby overhears Kim making a call to her lawyer and she ruthlessly demands she gets full custody of Jamie’s daughter, Millie, who lives with her mum Andrea, by any means possible.

Gabby and Diane plan to leave the village

Frustrated by her own situation, Diane suggests to Gabby that they flee the village to get away from their troubles.

Later Diane is alarmed to hear that Kim wants to amend Gabby’s will to say that she’ll get custody to Gabby’s baby.

Gabby and Diane meet Bernice at the Woolpack and Bernice is shocked to learn of Diane’s plan to move to Portugal.

Later Diane and Gabby are thrilled when Bernice suggests she moves to Portugal with them, but they remind her she has to keep quiet about Gabby’s plan to leave the village.

Will Bernie be able to keep quiet?