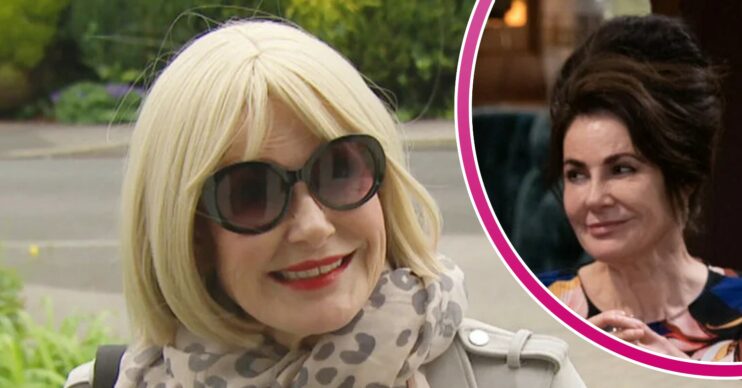 And she has something Faith wants back

Emmerdale spoilers for next week reveal Faith Dingle has been hiding another huge secret: a long-lost stepdaughter.

Faith starts the week with a plan that makes Chas suspicious.

Faith manages to rope Nate in to her plot, but what is really going on here?

Nate and Faith head off together and Faith is looking very glamorous. But she hasn’t told Nate where they are going – or why.

As she explains what’s going on, Faith reveals she has a stepdaughter.

The woman has something that belongs to Faith and the Dingle wants to get it back before it’s too late.

But Faith pushes ahead and blags her way inside the house thanks to a man named Angus.

However, Angus is outraged when he works out who Faith is and demands she leave.

Faith does as she’s told, but vows she will return and take what’s hers…

Nate refuses to be a part of Faith’s schemes the next day. So Faith takes matters into her own hands and steals his car!

Faith’s scheme is a success in Emmerdale spoilers!

Heading back to Angus’s, this time Faith disguises herself as a photographer for an estate agent. Angus falls for it and lets her in.

Meanwhile, Cain and Nate are in hot pursuit and are stunned when they see Faith rushing out of the house with a stolen bag! When Angus spots Nate he realises who the thief is.

For Faith, it’s a good result as she has her things back.

It turns out she was after a box of memories.

Cain, Chas and Nate are thrilled with the contents and Chas and Cain in particular reminisce about their childhood.

Faith is happy to have her family around her and her things back. But will the police soon come knocking?

And what of this mysterious stepdaughter?

How does she fit into Faith’s life?

And will we be seeing her – and angry Angus – again soon?

When does Faith die?

It would explain why she’s not too bothered by the threat of the police catching up with her over the theft.

But despite her giving up treatment after the cancer spread and the chemo stopped working, we don’t know how long Faith has left.

It’s likely to be months rather than years and she is spending her time living life to the full.

Does that include reuniting with her stepdaughter after all these years?