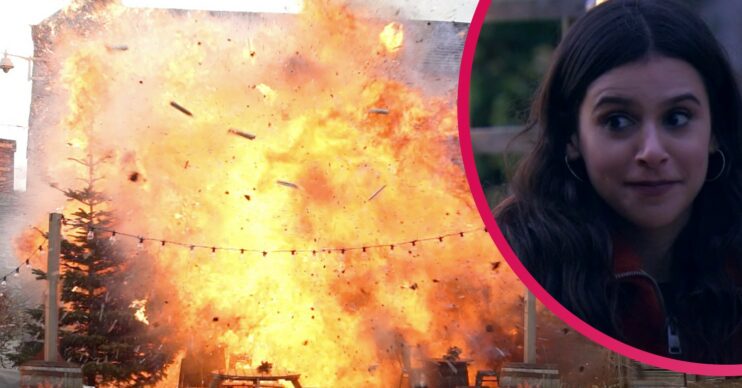 The explosive episode was packed full of shocks

Emmerdale delivered a dramatic Christmas Day episode this year with two lives hanging in the balance.

The explosive episode saw Al Chapman blow up the pub in a desperate attempt to force Chas and Marlon Dingle to sell up and turn it into luxury apartments.

And even though it was self-serving, the explosion stopped serial killer Meena Jutla from murdering her own sister Manpreet Sharma.

However both of their lives now hang in the balance in Emmerdale.

In the action-packed episode Manpreet finally realised that her sister is a dangerous killer.

She caught her attempting to plant drugs in Dawn Taylor’s home for social services to find.

And Manpreet quickly realised that Meena was lying about being pregnant with Billy’s baby.

She confronted her sister – and almost paid for it with her life.

Telling Meena that she is dangerous and needs help, Manpreet pushed the killer too far when she threatened to expose her to everyone.

Turning on her, Meena told her: “Oh sis. You have no idea.

“I was going to let you go but classic you had to go and get all up in my business.”

Smashing a bottle ready to stab Manpreet, Meena begged her sister to fight back – which she did.

But when she drew blood, Meena smiled and prepared to kill her own sister.

However she was stopped when the Emmerdale village pub exploded – sending them both flying and leaving them unconscious in the rubble.

Meanwhile Home Farm was in despair after Kim Tate dumped Will Taylor but not before exposing his flirting with Bernice Blackstock.

She was left sobbing after Will proposed – realising that she wasn’t enough for him.

Read more: Emmerdale: Kim to kill Bernice and Will after discovering their deceit?