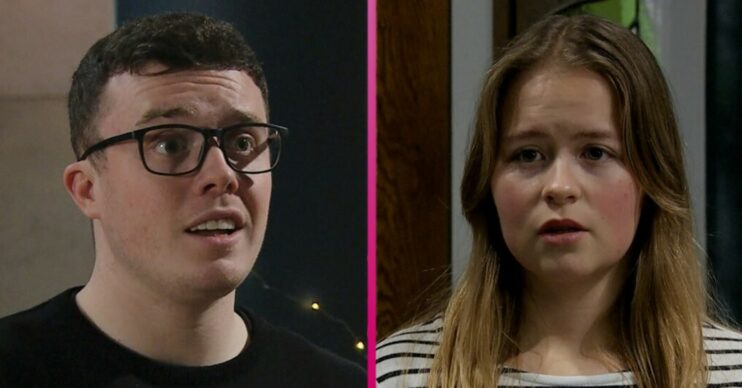 Emmerdale spoilers: Shock marriage proposal – but for who?

Is that MORE wedding bells?

There’s a shock proposal in Emmerdale next week, the latest spoilers reveal.

But it’s not exactly what it seems, as someone gets the wrong end of the stick over a romantic gesture.

Vinny Dingle is planning on giving Liv Flaherty a Valentine’s night to remember, after all her recent drama.

But Liv is rattled after being approached by a bunch of teenagers in The Hide.

They want to take a photo of her, because she’s ‘famous’ for allegedly killing Ben Tucker.

A furious Laurel steps in to defend Liv and tells the teens to sling their hook.

Does Vinny propose to Liv in Emmerdale?

Later, Liv and Vinny are playing video games together when Liv thanks him for taking her mind off what happened in The Hide.

An excited Vinny presents Liv with a jewellery box, but Liv’s reaction is not what he’s expecting.

She’s mortified as she thinks Vinny is asking her to marry him and rushes back to work.

Vinny’s left stunned, wondering how his romantic gesture could have backfired so massively.

How will he make it up to her?

Emmerdale fans know Liv’s had a rough time since being jailed for killing Ben, even though it wasn’t her.

Ben died at the hands of serial killer Meena Julta, who was in no hurry to stop Liv being locked up.

Last month, Liv took a beating in prison after getting on the wrong side of her cellmate, as she waited to be released.

Prison guards found her lying, bruised and bloodied on the floor of her cell, with one eye swollen shut.

Viewers of the ITV soap were horrified by the violence of her injuries, some even wondering if she was dead.

Do Liv and Vinny get married in Emmerdale?

Reports last month in The Metro suggested that Liv and Vinny may well tie the knot, despite Liv’s initial reaction.

The publication printed pics showing the couple celebrating with Liv wearing what appeared to be a wedding dress.

Emmerdale producer Laura Shaw recently teased that there will be three upcoming weddings for the soap this year.

Speaking to ED! and other press she said: “Well it wouldn’t be a normal soap year I don’t think, without a few births, deaths and marriages, would it? We’ve already seen Billy and Dawn get engaged on screen.

“And I don’t think I’m giving too much away by telling you that their wedding is definitely going to happen this year.

“It does happen on the most romantic day of the year which is Valentine’s Day, so not too long to wait for their wedding. But will it all go to plan?”

She also said: “We’ve also got another wedding coming up, a third one.

“That’s a bit more of an unexpected twist and I think that’s going to shock quite a few of our villagers and ruffle a few feathers.”

Could it be Liv and Vinny?